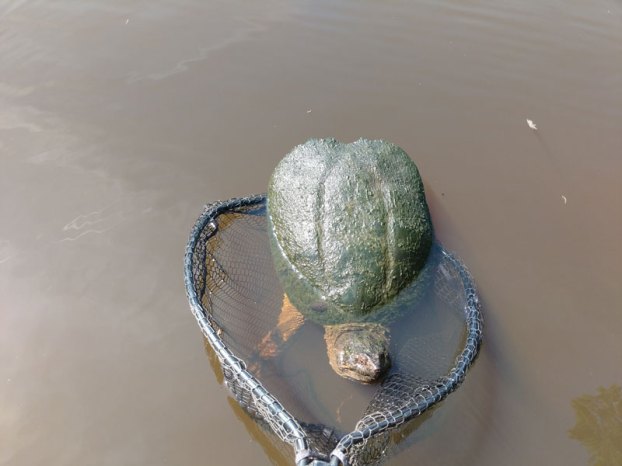 The RiverGuard helped this snapping turtle in the Blackwater by removing a leech from its shell and then providing a small fish for it to eat. -- Submitted Jeff Turner

Spirit of Moonpie and I spent the 24th through the 26th on the Blackwater above Joyner’s Bridge. The water was low, 4 feet on the Burdette USGS gauge, off color and 67 degrees. Air temps ranged from 57 to 75 degrees. Skeeters were bad, but deer flies were not and for that I am grateful. Usually by now they are terrible. This trip the trash was not too bad. Usually I pick up a lot downriver from the bridge, but on this run I only collected about a bag. It would seem some person or persons are helping me out some, and for that I am grateful. I saw no other water quality issues.

I had an interesting interaction with a giant snapping turtle on day two. I first saw the old turtle swimming on the surface, but noticed it was acting strange, not going underwater much. So, I made my way over to the prehistoric looking monster and was amazed that the turtle just stayed on the surface, which is unusual. I grabbed the landing net and just got it up under the turtle to give it a resting place. The old reptile just sat there blinking and looked quite content. I could see nothing wrong with it other than a large leech on the shell of the turtle. Yea, I was wondering how a leech could get blood through a turtle shell also, but obviously they can. Anyway, I eventually took the turtle over to shore to see if it would go back in the water or want to sit in the shallow water. The turtle sat in the shallows a few minutes then paddled back into deeper water. But it still didn’t really go anywhere. So, I decided I’d see if it was hungry. By then Moonpie was going like “Dude, are we going to spend all day messing with baby Gamera here?” I fairly quickly caught a small red throat and disabled the fish so the turtle could get it. When I plopped it in front of the turtle at first, I didn’t think it had known it was food, but all of a sudden the turtle dove right where the fish sank and it stayed there about 10 minutes making lots of bubbles. So hopefully it got a bite to eat. And I didn’t even poke my eye out! I am very grateful for that.

It was a busy river on this Memorial weekend trip. I usually do not go on a holiday weekend because of the increased traffic on the river. However, I had received a tip that there was possible alligator weed on that part of the river and a lot of it. So, I pretty much had to go investigate that. Thank goodness what I discovered was not gator weed and for that I am very very grateful. What I found was a lot of water starwort, at least I think that’s what it is. It was very prevalent.

The fishing on this trip started off not good. First day was a fish now and then. On day two I ventured waaay downriver making it nearly to Carson Whitley’s. I reckon I caught 15 or so largemouth. However, because none of those fish weighed over a pound none of them had very large mouths! I also caught like 8 chain pickerel. Most all were caught on the A.C. Shiner. I tried topwater for hours but did very poor going that route. If I had given up topwater earlier I would have caught more fish, but it just felt and looked like topwater conditions. Regardless, I was very grateful I caught as many fish as I did on the two rivers, we call the Blackwater and Nottoway.

To contact Jeff about river issues. email him at blknotkpr@earthlink.net.

By Kristi Hendricks This year of 2020 is a year of celebration for the Surry Garden Club as the club... read more