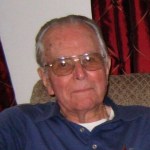 FRANKLIN – Harold Keith Rutledge, 96, widower of June Pickard Rutledge, passed away on June 2, 2020, in The Village at Woods Edge.

Born in Oklahoma City, Oklahoma, he was the son of the late Arthur James Rutledge and Addie Alma Gooch Rutledge. Harold was also predeceased by his sister, Wanda Arnett.

He was a WWII Army veteran and the recipient of a Purple Heart and two Oak Clusters.

In the early ’70s, he was the plant manager and designer of the Particleboard Plant in Franklin. Harold then moved to Crossett, Arizona, where he was a wood procurement General Manager for Georgia Pacific until his retirement.

A private memorial service will be held at a later date at Forest Lawn Cemetery in Glendale, California.

The family suggests that in lieu of flowers, memorial donations be made the Alzheimer’s Association, SEVA, 6350 Center Drive, Suite 102, Norfolk, VA 23502.

FRANKLIN – James Thomas Evans of Bolling Street, Franklin, passed away on May 31, 2020, in Southampton Memorial Hospital. A... read more