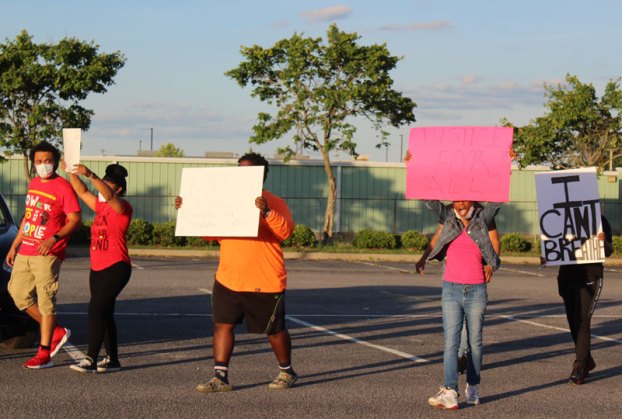 A group of approximately eight people walked about the Walmart parking lot early Monday evening to protest both the violent death of George Floyd in Minneapolis and the racism and violence that they say is pervasive in this country. -- Stephen H. Cowles The Tidewater News

Peaceful protest calls out for justice 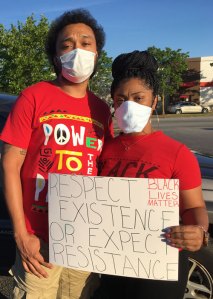 Cedric Hines and LaDonna Porter were also among the participants in the peaceful demonstration. “You have to show the peace to get peace,” said Porter. — Stephen H. Cowles The Tidewater News

Those were some of the chants called out by a group of eight black men and women as they marched early Monday evening in the parking lot near the Walmart on Armory Drive in Franklin. The newspaper learned about a planned protest and that the store would be closing at 6 p.m., rather than 8:30, but a store manager by the name of Josh could not confirm the reason, and instead directed questions be made to corporate media relations.

Their demonstration was, in part, a local reaction to the death of George Floyd in Minneapolis, Minnesota. According to reports in national media, during an arrest made on May 25, one of the police officers, Derek Chauvin, was shown in a video to be kneeling on Floyd’s neck for a reported 8 minutes and 46 seconds. The man called out at one point, “I can’t breathe!” His death was later ruled by one autopsy to be a murder. Chauvin has been formally charged with third-degree murder, and the three other officers at the scene are reportedly also being investigated.

Since then, violent protests have occurred in various parts of the country.

But not in Franklin this day.

Standing next to Hines, LaDonna Porter stressed about the gathering, “There’ll be no looting. No violence. We’re standing together as one to show unity. You have to show the peace to get peace.”

Cedric Hines said, “Rest in peace, George Floyd,” and immediately added that while not meaning to take away from the tragedy, this protest “is more than just about one incident. Watch the video.”

Seated in her car nearby, Katisha Bynum said she learned of the gathering while scrolling through Facebook. She came out “to show support for the organizers, the black community and make people realize that racism and violence are everyday. When does it stop? So, a peaceful protest — for me — is a start.”

Sandra Joyner holds up her sign that carried around the Walmart parking lot. — Stephen H. Cowles The Tidewater News

Sandra Joyner and Latanga Peebles, the two earliest people to arrive, walked about the lot carrying their own signs and calling out for justice. each spoke about their reasons for attending.

“We love everybody,” said Joyner. “Change the laws so that they will protect all people.”

Peebles said, “After watching so much [on TV], it has me rethinking about a law enforcement career.”

She noted that dogs of the same breed, but different colors, such as yellow and black labs, “they don’t fight. The Lord gave us power over everything, yet we fight. We are human beings. That’s not right.”

The Franklin Police Department later commented via spokesman Sgt. Scott Halverson that it had been made aware of the event.

“We would like to thank the organizers of this peaceful protest for maintaining an organized march. There were no incidents that occurred this evening.”

COURTLAND Forty-nine of Southampton County’s 144 confirmed cases of COVID-19 have occurred in areas with a Courtland ZIP code according... read more