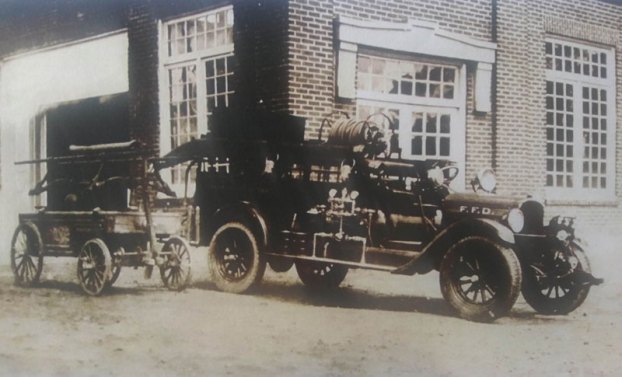 The buildings that would later become the home of the Franklin Fire Department, and much later Highground Services Inc., were constructed, incrementally, starting in 1906, to house the Franklin Electric Light Works and Pumping Station (FELW&PS). At that time, Franklin was generating its own electricity and conveying it to residences and other buildings throughout the town. That site was also the intake point from the Blackwater River for the Franklin Municipal Water System.

The property on which the FELW&PS was built was acquired by the Town of Franklin, incrementally, from various property owners over a period of time extending from 1888 to 1906.

To start with, John Pretlow Jr., in a deed dated July 23, 1888, conveyed to the Atlantic and Danville Railway Co. property adjacent to the Blackwater River for railroad construction— except for a strip of land 30 feet wide and 530 feet in length that was to be laid-out and donated to public-use forever. This was to give municipal access to the river. In 1906, the original FELW&PS building was erected on that strip of land.

In October 1916, a bond issue for upgrading the Franklin water and sewerage system and the town electric light plant was put to the people for approval: $17,000 for a water filtration plant; $10,000 for the electric light plant; and $13,000 for street improvements. Paul Scarborough, editor of The Tidewater News, spoke in favor of the bond issue and urged approval. “Our water supply is inferior in quality — if not dangerous. Our municipal water is taken from the Blackwater River, unfiltered; unwholesome conditions exist above the intake point. This is a matter so vitally important that no voter and taxpayer can afford to vote against i. As for Franklin’s municipal electric light plant, the system, dating to 1892, should be changed from direct to alternating current. And, our streets, especially Main Street, need much improvement. The plan is to pave Main Street and put in concrete curbing.”

The bond issue was approved. And, over time, improvements were made in the water system, the electric light plant, and the streets. 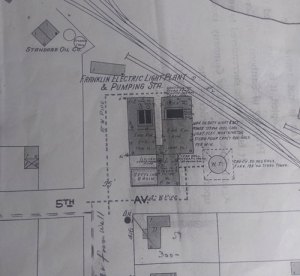 A 1923 SANBORN MAP shows a new building addition parallel to and west of the FELW&PS building, putting the complex even more into Mechanic Street — infringing on the right-of-way. That building addition was to become the new location for the Franklin Fire Department. Previously, the Franklin Fire Department had operated out of various other town locations.

In the 1920s and 1930s, several artesian wells were tapped into, the first one being put on the northwestern corner of Fourth Avenue and Mechanic Street. The wells were to supplement the river water supply. Steve Watson, with the City of Franklin Public Works Department, has documentation on those works. In later decades, the system transitioned to deep wells.

On May 23, 1936, the Town of Franklin Board of Commissioners approved a contract with Virginia Electric Power Co. for purchase of electricity, as needed, to supplement the town system. In later years, the town electricity generating system was transitioned out in favor of power purchased from VEPCO.

In October of 2014, Franklin-Southampton Economic Development, Inc. announced that Highground Services Inc. was graduating from the Franklin Business incubator. And, at the same time, the City of Franklin announced that the former FELW&PS / fire department building would be revitalized and would take on a new life — the home of Highground Services Inc. 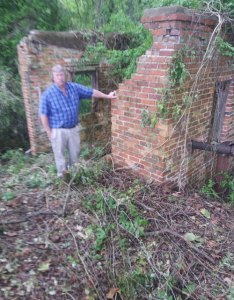 Jim Strozier at the size of the old pumphouse, cleared of most overgrowth. — Submitted Clyde Parker

Recently, Jim Strozier, CEO of Highground, and his associates, as participants with CLEAN RIVERS MONTH (April 2020), and in coordination with Anne Parker, decided to clear underbrush and vines on their property, next to the Blackwater River. While doing this, they uncovered the remains of the original water intake system pumphouse; of brick construction, it is situated on the very edge of the river. Apparently, it is not generally known that it still exists.

Jim Strozier said that due to COVID, with his crews almost idled, he used the spare time to have them clean up along the riverbank near his office.

“It definitely looks a lot different,” he said. “We still have more to do, but, it has greatly opened up the view of the river, and exposed an old brick structure that was built out into the river.”

As previously stated, when the Town of Franklin added to the original building, it was built on top of Mechanic Street, which was then realigned and connected to Jackson Street. As a result, Union Street, a street that had run from Mechanic to Jackson Street was eliminated.

Jim Strozier said, “We adopted that name for the LLC that now owns the building, just to keep the history. The building is now owned by “Union Street Properties LLC.”

Broncos get their moment in the sun