BERLIN — Ashton Meredith “Mert” Felts Jr., 72, of Berlin, Virginia, passed away surrounded by the love of his family, community and the peaceful light of God on May 17, 2020, following a courageous five-year battle with cancer. 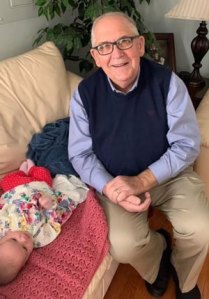 Mert was born on Dec. 19, 1947, to Louise “Pudden” Taylor Felts and the late Ashton Meredith Felts Sr. of Berlin.

He is survived by his wife of 50 years, Jean Thompson Felts; his son, Ashton Meredith “Trip” Felts III and fiancée, Kristina Caroline Johnson of Suffolk; two daughters, Ellyn Felts Hassell and husband, Derek V. Hassell of Williamsburg, and Taylor Felts Billingsley and husband, Ryan E. Billingsley of Arlington; his brother, John Pate Felts and partner, Ron Bracco of Washington, D.C.; and six grandchildren, Cayla Brittle Felts, Ashton Pate Felts, Maxton Anderson Hassell, Eva Page Hassell, Everett Meredith Billingsley and Hazel Page Billingsley.
A faithful servant of God, Mert will forever be remembered for his deep love of family, church and community. His curiosity, ingenuity and tremendous work ethic extended into every aspect of his life. In all things, his gentle spirit and patient demeanor served as a bright light to all who knew him … and there was always a humorous story to tell.
Mert had a lifelong love of the art and science of glassblowing. Many of his pieces are in use today at scientific institutions and on Christmas trees and shelves of his family and friends.
As a young high school student, Mert’s interest in glassblowing led to several summer internships at Phillip Morris. Under the mentorship of John Bivens, who later became a dear friend and colleague, Mert’s love of this unique art blossomed. After receiving his B.S. in chemistry from North Carolina Wesleyan College (where he snagged the love of his life, Jean) and studying scientific glassblowing at Salem County Technical Institute in New Jersey, he ventured to the State Department of Agriculture in Richmond, as both chemist and glassblower. A few years later, he and Jean returned to Berlin to help his father, Meredith, run their family farm in the heart of Southampton County. It was here that his love of farming and glassblowing became intertwined.
While farming and raising three children, Mert spent part of his weekends at Old Dominion University’s School of Sciences where he repaired scientific glass. Often called the Phantom Glassblower, he slipped in on Sunday evenings to fill orders for the upcoming week. As an active member of the American Scientific Glassblowers Society, he researched and applied the latest techniques. Over the years, he provided scientific glassware for Eastern VA Medical School, Colonial Williamsburg, the College of William and Mary, VA Institute of Marine Science and Research Glass, among others.
Mert had a deep desire to give back. He immersed himself in local and state initiatives, sharing his knowledge and skillset. He served as president of the Virginia Peanut Grower’s Association and member of the Board of Virginia-Carolina Peanut Promotions, advocating for peanut subsidies. As a member and chairman of the Board of Economic Development of Southampton County and chairman of the Board of Directors at Paul D. Camp Community College, his wisdom and guidance inspired future leaders. Through his work in the Ivor Ruritan Club, he improved his community and touched many lives.
After retiring from farming, Mert marketed Felts Peanut Farm peanuts, designed original Christmas ornaments, and fulfilled glassblowing contracts with Jefferson Lab and James R. Reed & Associates. He connected with old friends from his Nu Gamma Phi Fraternity days at Wesleyan, of which he was a charter member.

Throughout his journey, Mert made time for what mattered most. He was a loyal member of Millfield Baptist Church serving as deacon, trustee, Sunday school teacher, historian, RA leader, and very distinguished bass in the Millfield Choir. He was a follower of Christ and loved others deeply.
We will miss his laugh, his stories and his calm presence. He was a loving husband, father, son, brother and friend to many. In his own words, “Slow down, enjoy the beauty of this earth, and spend time with family and friends. We only go through this life once.”
A private service will be held for immediate family. A larger memorial service will be announced at a later date.

The family is being served by R.W. Baker & Co. Funeral Home where condolences may be posted to www.rwbakerfh.com.

In lieu of flowers, please consider donating to Millfield Baptist Church at millfieldlife.org or Duke Cancer Institute at www.dukecancerinstitute.org/give.

FRANKLIN — Eddie L. Mayfield of Hunterdale Road, passed away on May 16, 2020. The service for Mr. Mayfield will... read more