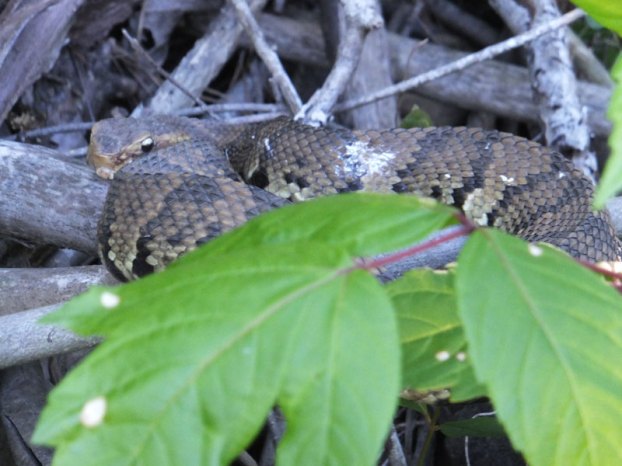 The RIverGuard discovered this cottonmouth on an abandoned beaver hut. -- Submitted Jeff Turner

Shopping in the corona-free fish market

Spirit of Moonpie and I spent the 9th through the 11th on the Blackwater below Franklin. The water was a little high, fast, clear and 58 degrees. Air temps ranged from 37 to 70 degrees. Still, the ‘skeeters were terrible.

Trash on this patrol was not bad, which was unusual given the high water recently. I guess corona is good for litter control. I picked up only a half of a bag. I saw no other water quality issues.

I had a terrible scare on this trip. Dead trolling motor battery issues and, in an attempt to rectify the problem, created a worse problem because I’m stupid. I hooked up the outboard motor battery backwards blowing the fuses. I did not know where they were on the motor either. Thank God for YouTube. Two fuses were actually blown and only one spare fuse was in the fuse box. I could only find a 5-amp fuse in my fuse collection so I had to use that where the 15-amp fuse was and luckily it worked until Freezing Deer once again came to my rescue with correct fuses. But that was on the second day. The first night I had to make it to base camp on the electric motor. Luckily, I was upriver from camp so with the fast water I was going with the flow and I did not kill the trolling motor battery. I made it to camp right at dark. Needless to say, that whole night I wondered how I was going to get home. Thank the Lord it all worked out.

So, it was a very stressful trip; however, the fishing was great. I caught several bass, three of which were nice 2.5 pounders. I also caught plenty of chain pickerel (Jack), which is what I was trying to catch for the freezer. All the fish were caught on a pink — yes pink — A.C. Shiner and a modified Mepps. It sure was nice to add a bunch of Jack fillets to my emergency stockpile. And it was so nice to shop for them in one of the corona-free fish markets we call the Blackwater and Nottoway.

By John Bunch Virginia Master Naturalist When it comes to bees these days, the Honey bees seem to get all... read more