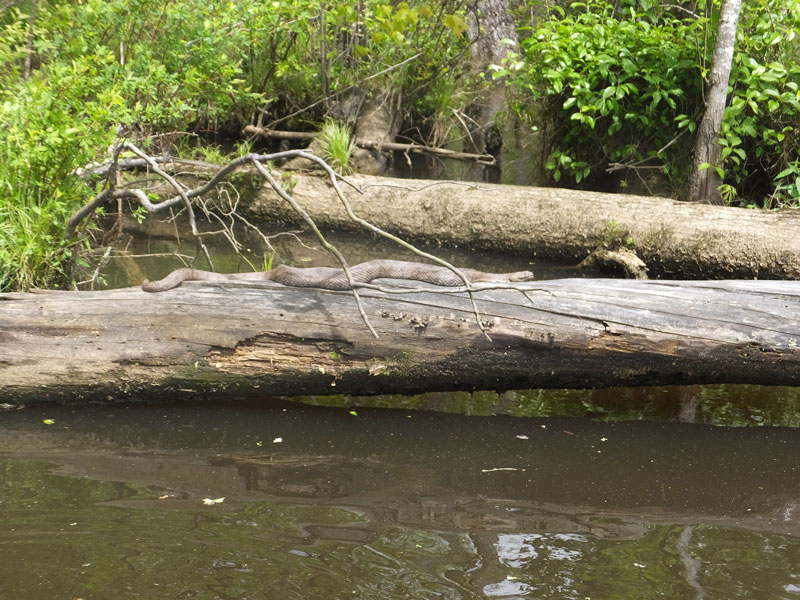 A Brown water snake makes its way on a log in the Nottoway River. -- Submitted Jeff Turner

Spirit of Moonpie and I spent the 27th through the 29th on the Nottoway below the Bronco Club. The water was normal, little cloudy and 60 degrees. Air temps ranged from 42 to 80 degrees. Trash was light and I saw no water quality issues. 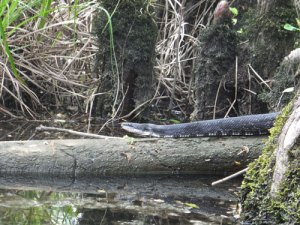 The RiverGuard was recently on the Nottoway and spotted this King snake. — Submitted Jeff Turner

I confiscated a bunch of illegal orange string limb lines that were downriver from Mill Creek. None had tags on them, some were hung up in the trees, some dangling in the water. Boy, that burns me up. On one of the limbs I left a plastic sealed information card that I designed for these occasions which explains the regulations. It’s hard for me to believe people don’t know what the laws are to fish on the river. Luckily, I got to these lines before fish or other wildlife got hooked and died a slow death on them.

Speaking of wildlife, whewww, the snakes were out in force this patrol. I saw some monsters too. One brown was easily 5 feet long. I even saw a kingsnake swimming and hunting. Moonpie saw that and exclaimed, “Snakes alive, that’s a long snake!” I looked at her and said. “Where did you hear that saying? That’s what the old folks used to say when they saw a big snake.” She looked at me and grinned and said, “From you, old man.” I grabbed the paddle and swatted at her, but she had already bailed out of the boat.

The fishing on this trip was pretty good. I ended up catching I guess about seven bass, some really really small. I also caught a few nice bream accidently while fishing for chain pickerel. I caught five of those. They came home with me as groceries hhhaaaa.

So it was a really nice trip, nice weather, nice nights … ‘cept skeeters were right tight.

Sadly, land-based patrols will soon end though ’cause it’s getting too hot to be in the woods. I will soon transition to pontoon boat patrols. I’d rather have another month of land-based [patrols], but alas it seems I have to start pontoon trips earlier and earlier and they last later and later into fall. Don’t really matter as long as I am out on the two rivers I love so much. The two we call the Nottoway and Blackwater.