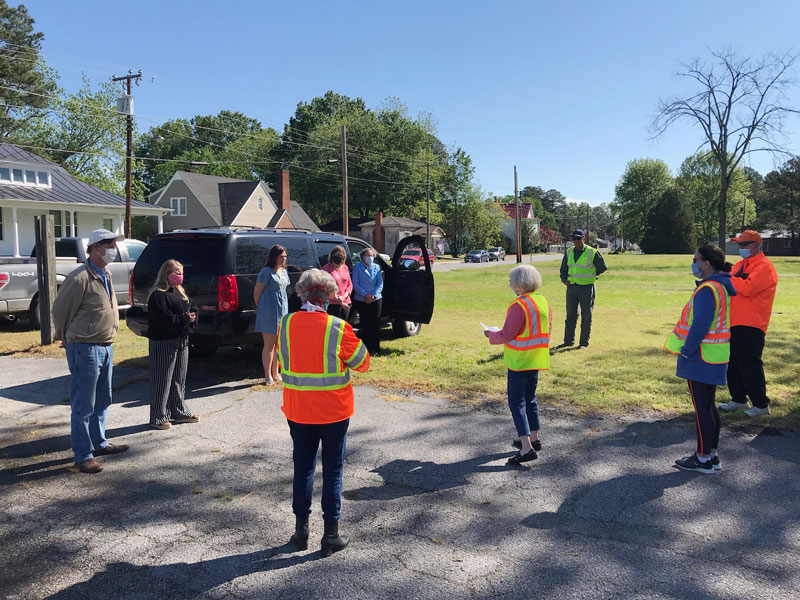 Using all recommended precautions, volunteers gathered to get bags and equipment to clean up some areas of Boykins this past Saturday. -- Submitted 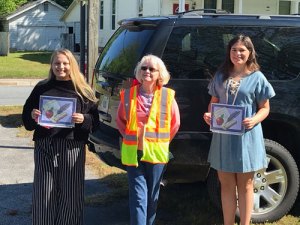 It would seem that with the Governor’s COVID-19 stay-at-home order there would be less litter on our state’s roadways, but there is still plenty of it, just six months since the last clean-up effort. And, recent heavy rains have flooded it out of ditches onto the ditch banks into plain sight.

In observance of Earth Day/Clean Rivers Month/Federation Day, the GFWC Tarrara Woman’s Club and Boykins Lions Club held a joint clean up day on Saturday, May 2. Five woman’s club members and three Lions all wore masks as they practiced social-distancing in front of their vehicles in a parking lot to get their instructions for the project since neither club has been able to hold its regular meetings.

The Tarrara’s used the opportunity to announce their scholarship winners who came with a family member for the brief presentation. Three generations were there as Ann Morgan Hawthorne received her certificate — her mother, Lil Hawthorne and grandmother, Dot Lassiter, who is an honorary member of the club after having been an active member over 50 years. John Skeeters was there to see Ryleigh Skeeters receive her certificate. The club will send $350 from fundraising projects to each of the scholar’s schools.

A brief presentation was also made to recognize the outgoing president, Laurel Livingston, for her four years of serving in that position. Not only is she leaving the position, but also the club and the area as she and husband Mike are moving to Florida. She will receive a past president’s pen and guard when the GFWC headquarters in Washington D.C., is reopened. She was praised for her dedication to the federation, the club and the community and given a gift card in appreciation.

Because there was a small group it was decided to concentrate on the areas leading into Boykins to pick up litter. Three teams dispatched to work on Route 35 from the intersection of Route 671 through the town limits near the North Carolina border and Powell’s Hill Road leading in from Branchville. Armed with gloves, vests, grabbers and bags provided by the Southampton Litter Control Council and Virginia Department of Transportation, 20 bags of litter were removed and hauled to the local dumpsite in just over two hours for most of the workers, with a total of 18 hours. It was a lovely day to do a not-so-lovely task, but it was worth the effort to see the cleaned up roads and everyone got a good dose of the sun’s virus-killing UV rays to boot.

Thanks to all who participated, and to all of you who made the mess — just stop it.