BRANCHVILLE — Mary Belle Purviance Futrell, 92, widow of Harold Preston Futrell Sr., her husband of 49 years, passed away on May 1, 2020, in her home with her loving family by her side. 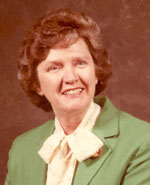 Mary was a 1946 graduate of Boykins High School and attended Averett College.

She was a retired eligibility technician and supervisor for the Southampton County Department of Social Services.

Mary was an active member of Cross Roads Community Church, where she was a Sunday school teacher and the choir director for the children and adults.

She was a former president for the Boykins High School PTA and Boykins Junior Woman’s Club and a past matron of Southampton Chapter, No. 68, O.E.S.

Mary was a member of the National Society of the Daughters of the American Revolution, Hicksford Chapter, serving as vice regent from 1995-2001. She was a charter member and first vice president of the Southeastern Virginia Food Bank, a former assistant director of the Blackwater Baptist Association and member of the Branchville Town Zoning Appeals Board.

Mary was a member of the National Federation of Music Club and the Franklin Music Study Club.

A private graveside service will be in Beechwood Cemetery.

The family suggests memorial donations be made to any favorite charity.