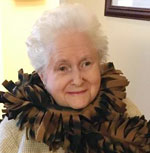 She was a native of Isle of Wight County and was a daughter of the late Guyver Lee and Gladys Johnson Parker.

Virginia was a graduate of Hicks Beauty Academy and was a former beautician and former hostess at the Inland Cove Seafood Restaurant.

She was a member of Burdette Baptist Church.

Virginia was a devoted mother and grandmother.

A private graveside service will be on Friday, May 1, in Southampton Memorial Park with Pastor David Dillon officiating.

The family requests that memorial donations may be made to the Alzheimer’s Association or the American Diabetes Association.