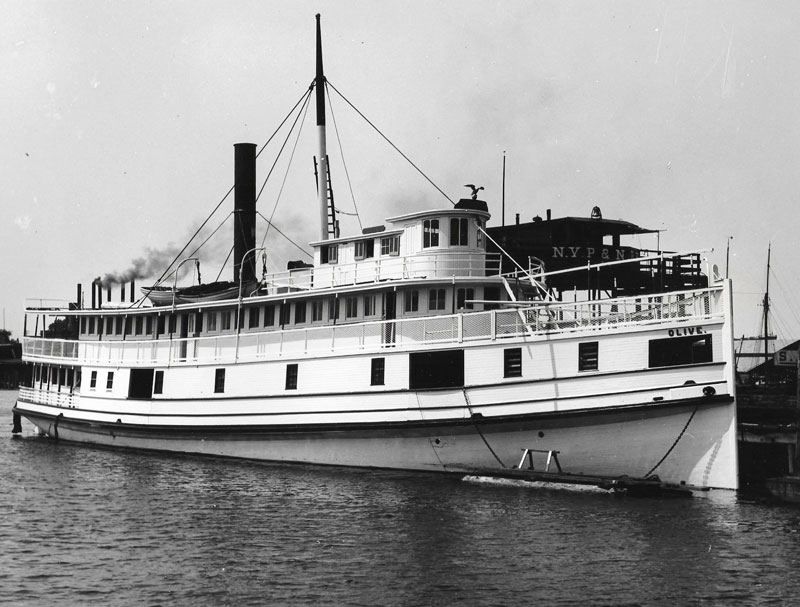 This photo, taken in 1903 shows the "Olive," which was one of the river vessels belonging to the Albemarle Steamship Navigation Co. -- Courtesy Mariners Museum 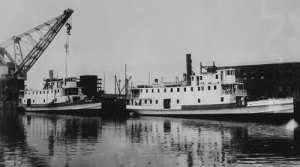 This photo from 1911 shows, from left to right, the “Virginia,” and “Carolina,” both in service to the Albemarle Navigation Co. — Courtesy of the Mariners Museum

A major part of Franklin’s early development was due to the existence of the Albemarle Steam Navigation Company (ASN). It was founded by Franklin’s Pretlow family with headquarters in Franklin. ASN was in business from 1837 to 1929, operating numerous steamships up and down the Blackwater, Chowan and Meherrin rivers.

The Portsmouth and Roanoke Railroad, later known as the Seaboard and Roanoke Railroad, and, still later, as the Seaboard Airline Railway, transported people and goods from Norfolk and Portsmouth, and also Virginia’s more inland areas, to “Blackwater Depot.” At that time, the depot was on the east bank of the Blackwater River — in Isle of Wight County. From there, starting in 1837, AS steamships took on passengers and freight from the railroad and, going down-river, completed the connection to Edenton and, sometimes, points further south. And, passengers and freight, destined for the Norfolk area, arriving by steamships from points in Eastern North Carolina and beyond were transferred to the railroad at Franklin Wharf.

In 1838, the depot was relocated to the west side of the Blackwater River, in Southampton County. That was the onset of a settlement which, by 1838, was being referred to as “Franklin Depot.”

For a good period of time, during the late 1800s and early 1900s, there was a rail spur-track that ran from the main line right down to an area adjacent to the river. For passengers wishing to have comfortable overnight accommodations, there was the Barrett Hotel on Main Street. 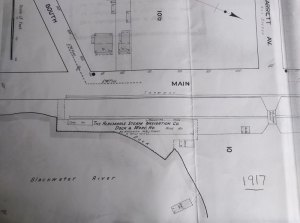 This map from 1917 shows the location of the Albemarle Steam Navigation Co. Dock and Warehouse on the bank of the Blackwater River in Franklin. — Courtesy

Other steamships owned by ASN made roundtrips from Murfreesboro, North Carolina, by way of the Meherrin and Chowan rivers, to Edenton.

Up to the early 1860s, Franklin was developing into quite a good size village. In addition to rail and river commerce there were other business enterprises including a sawmill, several general stores, churches and a hotel. However, due to the Civil War, much of the commerce up and down the rivers was interrupted. And, the Franklin area became extremely desolate. After the war, though, there was a significant resurgence of rail and river activity, causing a sort of “boom” for ASN and the Village of Franklin as well as the villages down the Chowan River.

John A. Pretlow Jr. (1874-1933), for the greater part of his life, was in active management of ASN. For a good period of time he served as president of the company and his brother, Robert A. Pretlow, served as vice president. The brothers were sons of John Alexander Pretlow Sr. and Mrs. Evelyn Bolling Pretlow, and were born at “Riverview,” the old Pretlow plantation next to the Blackwater River just south of Franklin.

In 1911, in response to accelerated customer demand, ASN placed contracts with Newport News Shipbuilding and Drydock Co. for construction of two modern steel screw steamships. The new steamships had much larger freight and passenger carrying capacities than the older ones.

“The new steamers will meet our demands admirably as they are to be constructed especially for the needs of the line and its patrons,” Mr. Pretlow said at the time.

The two new ships replaced two older and smaller ones, named “Hertford” and “Keystone,” which were sent to Newport News for scrapping. The two new ships were named “Virginia” and “Carolina.”

(Note: The “Hertford” was once known as the “Olive” which, while under that name, sank on the evening of Feb. 16, 1903, during a violent storm, in the Chowan River, 15 miles south of Tunis, North Carolina. The boat was on its way to Edenton, North Carolina. Seventeen of the 30 people on board perished in the sinking. Some of the unidentified victims were buried in a mass grave in Franklin’s Poplar Spring Cemetery.

The captain of the “Olive” was George H. Withy of Franklin. He was not in any way considered to be at fault in the tragedy. In fact, he took heroic steps and actions to minimize the loss of life and property.

A few weeks after the sinking, the “Olive” was refloated and towed back to Franklin. A little later, the “Olive” was rebuilt and rechristened the “Hertford,” and put back in service, mainly along the Meherrin and Chowan rivers between Murfreesboro and Edenton.)

Pretlow lived long enough to experience the demise of ASN. In 1929, the company went out of business due primarily to the evolution of transportation from waterways to truck and rail. Steamships were rapidly disappearing from the waterways of Northeastern North Carolina and Southeastern Virginia. Pretlow died in February of 1933.

Southampton County resident Adolphus Ashburn “Ash” Cutchin III, Withy’s great-grandson, has extensively researched the “Olive” story. And he provided much of the information used to tell the overall story of ASN.)