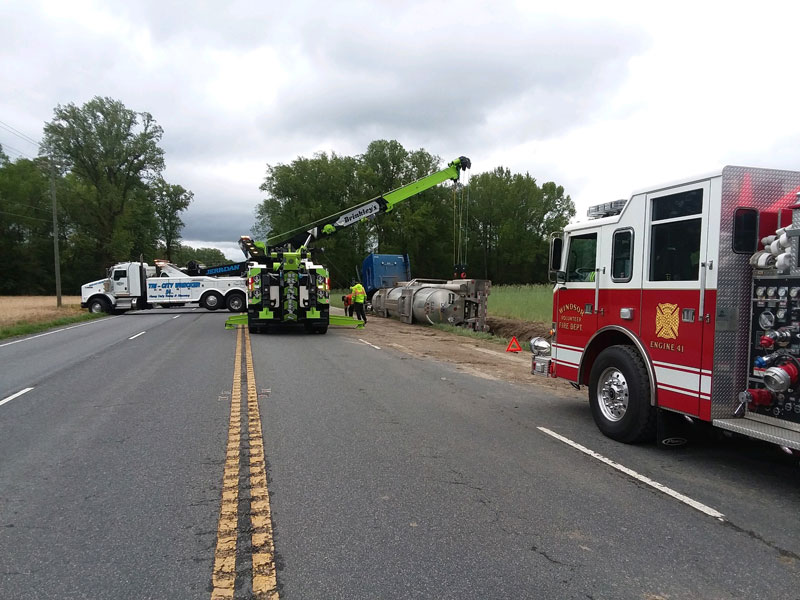 A hazmat clean-up crew was on the scene where a tractor-trailer carrying hazardous material overturned earlier on Monday morning on Route 460 west of Cut-Thru Road in Isle of Wight County. The truck's content did not leak, but 75 to 100 gallons of fuel spilled out. -- Submitted Virginia State Police

Both eastbound and westbound lanes of Route 460 in Isle of Wight County were reopened after being blocked for several hours after a tractor-trailer overturned at approximately 8:33 a.m. on Monday, April 27, on the eastbound lanes of 460, west of Cut Thru Road. This is according to Sgt. Michele Anaya, spokeswoman for for the Virginia State Police. She added that there have been no injuries, but that the driver has been charged with reckless driving.

Anaya stated that the driver of the 2020 Peterbilt tractor-trailer, Arrick H. Chaffin of Nottoway, ran off the roadway and overturned. The vehicle was hauling the corrosive material, liquid aluminum sulfate. The hazmat material had not spilled, however, the truck itself had leaked between 75 to 100 gallons of diesel fuel.

Anaya said the Virginia Department of Transportation had set up a detour, redirecting traffic off of 460 at Route 638.

[Editor’s note: This version updates the original posting to include the conclusion of the detour and inclusion of a larger resolution image.]