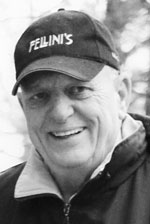 Mike attended Washington-Lee High School in Arlington, Virginia, in 1956, where he made lifelong friends. Mike’s admiration of military service started at a young age. He was only three when his father survived the sinking of the USS Oklahoma on Dec. 7, 1941, at Pearl Harbor. Both Montgomery and Mike’s older brother Marty (USNA 1958) (Ret.) were career Navy men whom Mike revered; it was his destiny to attend the Naval Academy also. Mike was a member of the 14th Company (USNA 1960), and as a plebe he was on the crew team that won the National Regatta.

Following his graduation from the Naval Academy, Mike became a Carrier Antisubmarine Plane Commander, aka “Fearless Naval Aviator,” flying the Grumman S2F and serving on the USS Intrepid. While in the Navy, Mike met Donna Dae Cavish. They married on July 31, 1965. He always referred to her as the most beautiful woman in Norfolk.

Post-Navy, Mike earned an M.S. in computer science from Purdue University, and later developed many original business accounting software programs. A job at Union Camp Corporation brought the family to Franklin, Virginia, where they raised their daughters and made long-lasting friendships in that wonderful town. It was here that Mike became a runner and a golf enthusiast.

Mike and Donna moved to Norfolk in 2008, where Mike often could be found at Fellini’s restaurant among his cherished friends. He also enjoyed the USNA Class of 1960’s monthly luncheons and weekends in Annapolis for Navy football and tailgates.

Booma was deeply loved by his family. He was his children and grandchildren’s biggest cheerleader. He was an avid reader, a gifted storyteller and writer, a lover of history, a sports fan and a true friend. He was quick-witted and always up for a board or card game, a visit, a night out, a road trip, or a political debate. Mike never tired of spending quality time with family and friends and never failed to make us all laugh and smile in his presence. We are devastated and pray that his warmth and ever-present humor will triumph over our loss.

The family will plan a memorial service at a later date.

In his honor, donations may be made to the EVMS Strelitz Diabetes Center http://www.evms.edu/givenow or Operation Smile. https://www.operationsmile.org/.