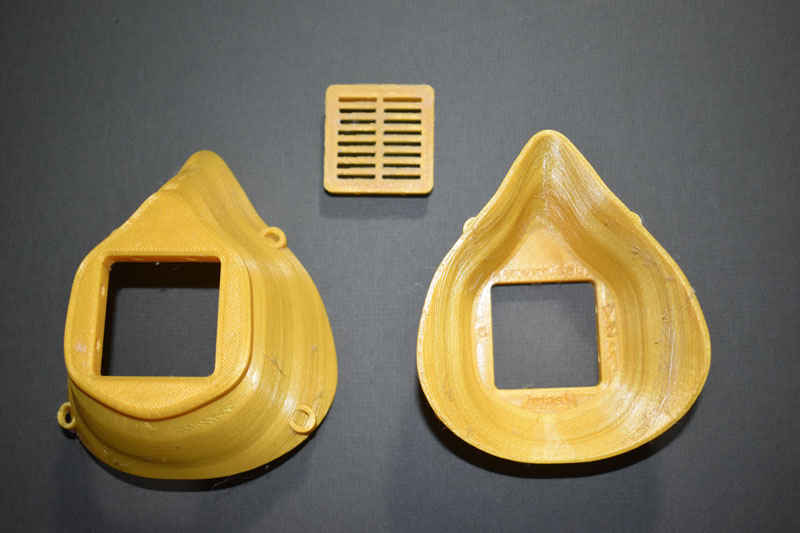 An early version of the masks. The N95 filters would be placed over the small square. Submitted | Amy Phillips

A collaboration among the City of Franklin, the Franklin City Public School System, Camp Community College and first responders has resulted in what can be a life-saving project: the creation of masks for EMTs, firefighters, city police and other personnel. The protective gear is being produced using 11 3D printers that belong to FCPS and the college.

City Manager Amanda Jarratt told The Tidewater News on Tuesday afternoon that she has a lead team that includes Franklin Fire and Rescue Chief Vernie Francis, Deputy Chief of Emergency Services Jerry Griffith and Franklin Police Chief Steve Patterson. During a meeting several weeks ago, the issue of Personal Protective Equipment was discussed; how to obtain more as well as maintain what’s available.

“Clearly the PPEs are critical,” said Jarratt. “We saw what New York City was doing by creating them from 3D printers.”

Francis added that the team contacted FCPS Supt. Dr. Tamara Sterling and Camp President Dr. Dan Lufkin, and in a group discussion heard what the schools are capable of doing. Francis said having the new masks will “slow the burn” of going through the available surgical-quality masks.

Jarratt added, “We’re thrilled by the cooperation and results. We feel a lot better about extending the supplies.”

Holt said, “Amazing things do happen when everyone works toward a common goal!”

Felts stated in an email, “We are honored to do our part to support the people who are working on the front lines of this health crisis.”

As mentioned earlier, among the people who are overseeing the printing of the masks is Calvin Sing, an instructional aide at S.P. Morton Elementary School. Through its STEM (science, technology, engineering and math) program, the site had been able to acquire three 3D printers. These are specifically designed to be taken apart and put back together as a way to teach students how the devices operate.

Sing, who has a background in engineering, said he had been contacted about the project of making the masks.

The design that’s being printed now is the third iteration, said Sing, and the masks are “a pretty tight fit.” He added that the coverings are not intended to be N95 qualification, he said, but the filter breathing material that goes inside meets that criteria. After use, the filter can be disposed of and the mask disinfected for later use.

In addition to leadership from Dr. Paul Rupert of the college, another person helping to make the masks is Kyle Johnson. Like Yanna, he’s also been heavily involved in the high school’s robotics program.

“The city forwarded a design from Rowan University in New Jersey that they wanted to test,” Johnson stated via email.” I had the first print done by 8 p.m. on April 3, and along with Mr. Sing we printed some of the Rowan-designed masks through the weekend.”

Amy Phillips, chairwoman of the Franklin City School Board, said, “This is a phenomenal display of a locality utilizing resources and coming together to help our everyday heroes. FCPS values our relationship with the City, and is always willing to work collaboratively with them in any way we can to benefit the community. Thank you to the staff for jumping in on this project, and thank you to those on the front lines of this pandemic.”

As yet there is no set number of masks to be produced. Johnson mentioned a week ago that FCPS had printed 65 design-approved masks by that time. Holt had stated that 90 masks would be produced each week as long as needed, and that the city will provide the materials.

Francis had said earlier that so far there’s not been a need for the masks, but they’re ready and waiting.

How a 3D printer makes masks 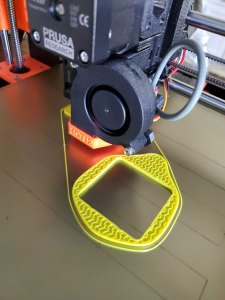 One of the 3D printers creating a mask for use by first responders. Submitted | Kyle Johnson

Kyle Johnson, one of FCPS’ manufacturers, provided some details about how the 3D printers create the PPEs:

• The 3D printed masks are made from PLA (polylactic acid), can be heated to form a custom fit to the wearer’s face, and can be sanitized with alcohol.

• Print times range from 3 to 5 hours to print mask and filter insert, depending on size and model of the mask.

• Rowan just released v4 of their mask design yesterday [April 13]. I have a test unit ready and have requested a meeting with FF&R to review. For now we are officially still printing the PDC design.

• In total, there are 11 3D printers working on this project, six from PDC and five from FCPS.