The Isle of Wight County Sheriff’s Office arrested a Smithfield man today, April 17, on charges of soliciting sex with a minor. 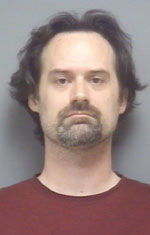 According to Lt. Tommy Potter, spokesman for the sheriff’s office, Chad Callahan of the 100 block of Butlers Point Lane is charged with use of a communications device to solicit a sexual act from a child and taking indecent liberties with children. Callahan, 38, was remanded to the Western Tidewater Regional Jail and was later issued a $10,000 secured bond with conditions.

Potter said the investigation began after Isle of Wight County’s Department of Social Services was made aware of communications received by a child, and then referred the matter to the Sheriff’s Office. Investigators executed a search warrant at Callahan’s home and then arrested him on felony warrants.