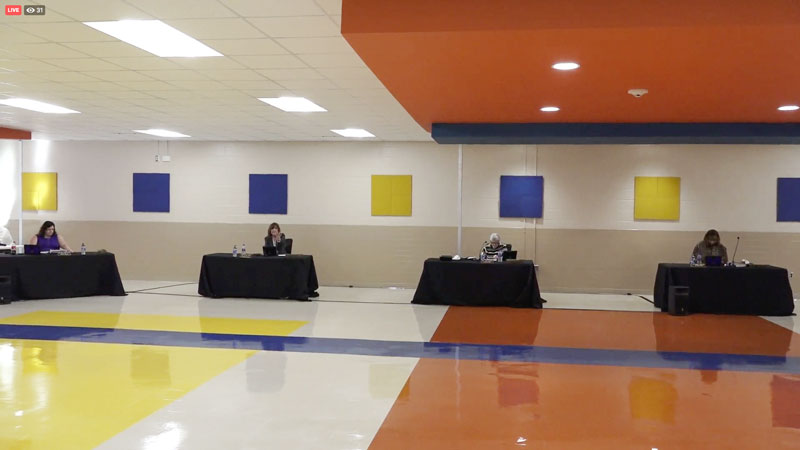 Isle of Wight County’s School Board held its April meeting in the cafeteria of Westside Elementary School, with board members spaced at least six feet apart from each other to implement social distancing. In-person public comments will no longer be accepted at meetings for the duration of the COVID-19 crisis. Instead, members of the public can email written remarks to School Board Clerk Tracey Reutt. Courtesy | Isle of Wight County Schools

On April 9, Isle of Wight County’s School Board voted to indefinitely suspend its policy of allowing in-person public comments at school board meetings in light of the COVID-19 pandemic.

According to the school division’s website, public comments will still be accepted via email to School Board Clerk Tracey Reutt at treutt@iwcs.k12.va.us, and are still limited in length to what would take five minutes or less to read aloud. Comments received via email will then be read aloud during the meeting.

At Thursday’s meeting, four of the five School Board members attended in-person, albeit each at her own table in Westside Elementary School’s cafeteria, and at least six feet away from each of the other tables. Alvin Wilson, the School Board’s Hardy District representative, participated remotely.

Thornton then informed the School Board at the meeting that written remarks had been dropped off at the school around 5 p.m., an hour before the meeting began, but then recommended that the School Board not touch or open the package, per the division’s safety guidelines.

“All of my staff and all of our building staff have been told that when they pick up the mail, when they receive packages, to not touch that package for 24 hours,” Thornton said. “This package did not follow this guideline.”

According to division spokeswoman Lynn Briggs, the man who had delivered the material, which was in a large manilla envelope, had walked up to the school and placed the folder on a window sill, then left. About an hour later, he came back, took the folder back, and again left. Anything delivered on-site less than 24 hours prior to the start of a meeting will be handled the same way, Briggs confirmed.

Thornton added that the division had consulted its attorney regarding how to comply with state and federal Freedom of Information Acts yet keep staff and board members safe from potential exposure to the COVID-19 virus.

“This was a recommended way to do public comments,” the superintendent said.

Isle of Wight County Schools’ public comment policy — listed as Policy BDDH in the division’s policy manual — wasn’t the only one suspended that evening. The School Board also approved a catch-all resolution drafted by the Virginia School Boards Association, which suspends school board policies in cases when the law on which that policy is based — such as some state requirements for graduation — has been suspended.

The division plans to begin teaching students new material on April 20. It has already received a waiver from the Federal Communications Commission to extend its school WiFi networks into the parking lots of all nine schools, so students and teachers without access to a reliable internet connection can send and receive online content from their cars. For those lacking a computer or other device to participate in online learning, paper packets are being printed, and will be distributed via bins located in front of each elementary school.

According to Briggs, roughly 700 IWCS students lack access to reliable internet, and 100 of those attend Windsor High School.

“If we were asked today that six months from today would you do all online learning at home … could you do that, my answer would be no, absolutely no,” Thornton said. “All schools have been basically asked to do this because of the COVID-19 within a matter of weeks. My staff has been working 12-hour, 16-hour days going through all the documents that come out of the federal government, that come out of the state, having to craft our documents and then work with teachers. The reason we didn’t start until April 20 with new learning was because we needed to get our heads wrapped around what this would look like and what could our teachers do at home.”

The COVID-19 pandemic has also impacted the division’s ability to hire new personnel for the 2020-2021 school year. While prospective teachers are still able to interview via phone, the hiring and training of school bus drivers has been put on hold.

“We are anticipating approximately five vacant [bus driver] positions,” Briggs said. “We are hoping to be able to pick back up with hiring and training in the summer, which is when we would typically hire and train for the new year. If the stay-at-home order and social distancing guidelines extend further in the summer, then we may have to look at adjusting routes for the start of the year if vacancies aren’t filled. However, we don’t feel like there is any cause for panic at this time.”