Sanctuary of the river 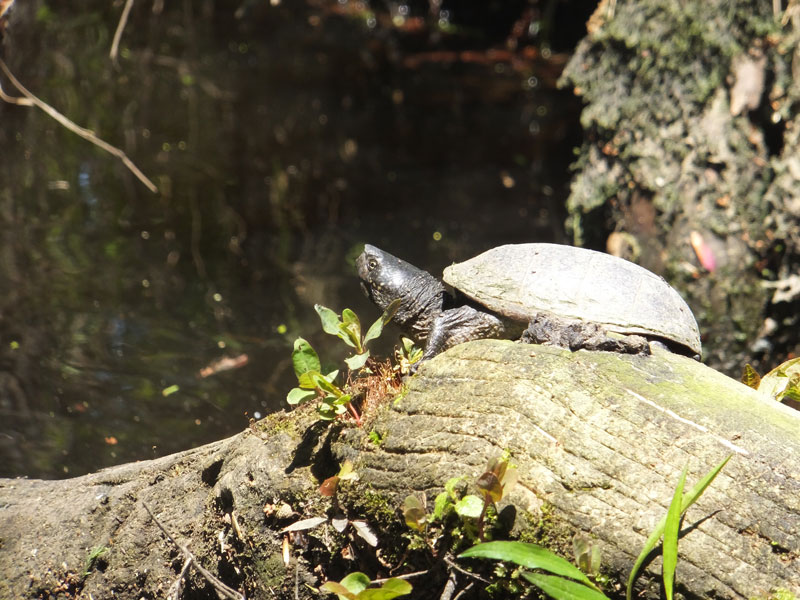 The RiverGuard spotted this Stink Pot Turtle sunning itself on a log in the Blackwater River. -- Submitted Jeff Turner

Spirit of Moonpie and I spent the 10th through the 12th on the Blackwater below Franklin. The water was high, then very low, clear, 62 degrees and fast. Air temps ranged from 36 to 65 degrees and the wind was like a hurricane during the day. Trash was light and I saw no water quality issues and thank goodness no untagged or abandoned limb lines. In the 50-plus years I have plied this river rarely have I seen the wind blow so much water out of the river so fast. In a matter of six hours the river dropped 33 inches and I’m sure it eventually made it to 36 after I went back to camp that night.

It was pretty cool riding around and looking at things one normally don’t get to see. Like the giant cypress stumps that were cut eons ago when the river was narrower. I have read that thecanopy of those majestic trees in many places met from shore to shore closing out the sunlight on the river. I sure wish I could time machine back to those days to check it out!

The fishing on this patrol was really good. I caught white perch, bream and lots of bass and chain pickerel. I was primarily fishing for the jacks to get some yumminess fillets for the freezer. I caught most of the bass and jacks on the AC Shiner and a custom in line spinner bait I make. I saw folks on the lower river tearing up the white perch on bottom rigs. Lots of two at a time were being caught and and as fast as the bottom rig hit the bottom.

I also checked on the bald eagles at Cherry Grove. I saw one of the adults sitting beside the nest. No parent was in the nest which usually means the little ones are hatched. I imagine they were waiting on the other parent to return with the groceries. I can’t wait to see how many youngins’ they have this year.

Wheww, it sure was nice to have a good safe trip this time. After the last trip’s nearly disastrous eye-poke fiasco, I was grateful for a healthy non-injury trip. I have been injured badly out there many times in my life and I am sure I will be injured more in the future, like a broken leg or hip, arm, or stabbed by a cypress knee, stuff like that. You never really think about your eye getting poked out until it happens, then you realize those things are damn important. Hhaaaa.

So yes, it was a very nice trip, even the hurricane-force winds didn’t take away from my enjoyment, well, not much anyway. On the way back to civilization that third day I was motorin’ up the river and it dawned on me how nice, carefree and … normal it was out here on the river. Yet only a very short distance away the world is in a crisis. People dying, food shortages and financial strife everywhere. Except here where I am in this boat on this river right now. It’s like the river is a sanctuary, my sanctuary and your sanctuary, too, if you want it to be that way on the two rivers we call the Blackwater and Nottoway.

Save a turtle, lose an eye