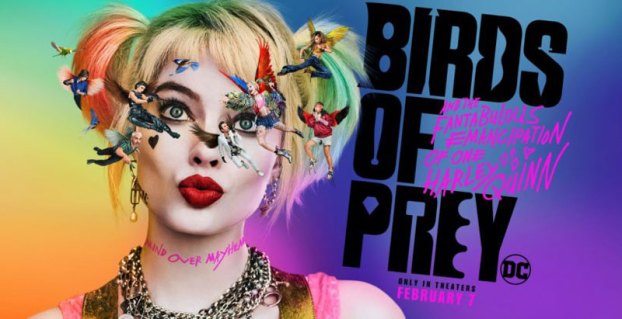 Movie review: Birds of Prey (and the Fantabulous Emancipation of One Harley Quinn)

“Birds of Prey (and the Fantabulous Emancipation of One Harley Quinn)” is just as amazing and outrageous as its title. Yes, the film is a female empowerment paragon both in front of and behind the camera. It celebrates diversity, stars five awesome women, is written, directed and produced by women, and features an all-female soundtrack. But the movie is so much more than the filmmakers’ gender; it is a breath of fresh air in a pretty dark and serious superhero space. With a flourish of self-awareness, humor and manic fun, “Birds of Prey” is a must-see thrill ride. More importantly, it is a much-deserved star vehicle for Harley Quinn, the best part of the ill-fated “Suicide Squad” and one of the most entertaining comic book characters ever.

Fresh from her breakup with The Joker (aka Mr. J), Harley Quinn (Margot Robbie) is stuffing herself with Cheez Wiz and going on robbing shopping sprees — including “buying” a hyena she names Bruce (Wayne) — to numb the pain. She is no longer under Mr. J’s protection, which means it’s fair game for the worst of the worst in Gotham to seek her out for revenge. It takes getting kidnapped by city kingpin Black Mask (Ewan McGregor) before Harley realizes she needs to take the threats more seriously.

To get herself out of this precarious (and deadly) position, Harley offers to recover a rare diamond that is key to unlocking a massive fortune. But through all of her high jinks, the bigger issue Harley is struggling with is rediscovering her own identity — one where she isn’t the sidekick to a strong man, but a woman with agency of her own. Along the way, she meets four other women that are looking for their own emancipations.

Renee Montoya (Rosie Perez) is a Gotham City detective who desires a nontoxic work environment free from misogynistic coworkers and an incompetent boss that was promoted after taking credit for Montoya’s work. If she can nab one of Gotham’s most wanted, Harley Quinn, and protect Cassandra Cain, she hopes to finally earn respect within the Gotham Police Department.

Helena Bertinelli aka Huntress (Mary Elizabeth Winstead) wants to finally let go of a childhood trauma that changed the trajectory of her life. If she can kill the last man responsible for killing her family, maybe she can close that chapter.

Cassandra Cain (Ella Jay Basco) wants to be liberated from feelings of abandonment after being in foster care for so long. A friendship with Harley Quinn may get her the security (not necessarily the stability) she desires.

Dinah Lance aka Black Canary (Jurnee Smollett-Bell) has silenced her voice for too long … in more ways than one. She doesn’t speak out when Black Mask sexually assaults a female customer at his bar and suppresses her metahuman super power, a supersonic sound wave of sorts, to fly under the radar. Dinah seeks to reclaim her voice and stand up for those being wronged.

With all of Gotham against her, Harley may need a little support from her new friends to help find the diamond and live to see another day.

One of my favorite elements of the film is seeing how much Robbie and screenwriter Christina Hodson understand Harley Quinn. There are so many layers to this character and just when you think you know what Harley is going to do next, she takes a sharp left turn. I have been burned before by more conventional writers taking the easy way out, choosing to make a character more “likeable” and palatable to audiences instead of staying on course to be complicated and interesting. Not so in “Birds of Prey.” The filmmakers never try to make Harley someone she isn’t, instead celebrating her enigmatic persona and constant tightrope walk between villain and hero.

“Birds of Prey’s” fight choreography is probably the best I have ever seen on screen, or at least the most fun. It is original, brutal and perfectly tailored to each character’s personality and what I assume would be their individual fighting styles. It’s no surprise that the fight and stunt coordinators from 87Eleven are the same geniuses that choreographed the fight scenes from “John Wick.”

According to several interviews, the actresses trained for months before and during shooting to do many of the fight scenes and stunts themselves; it definitely shows. There’s nothing worse than being taken out of a movie because you notice an actor was clearly using a stunt double in a scene. Never once did I notice that in this film; if anything, it was the opposite … me wondering how in the world Margot Robbie was getting away with doing so much on her own.

The supporting cast is the backbone of “Birds of Prey” and everyone seemed to be having so much fun filming. Can you blame them? I don’t even know where to begin with all of them. Jurnee Smollett-Bell and Ella Jay Basco were the two breakout performances for me. I can’t believe this is Ella’s first acting job because she was an absolute pro, giving Robbie’s Harley a sharp-tongued run for her money. Jurnee’s ability to reflect the emotions of the audience proved critical to creating the tone of the movie and palpable tension lingering in the seedy underbelly of Gotham.

Rosie Perez is completely in her element, showing age means nothing when it comes to kicking butt and taking names. Mary Elizabeth Winstead is always great and I loved that she was able to sell the humorous elements of her character and, at times, provide a more stoic, measured counter to Harley’s mania. Ewan McGregor was also delightful, playing the over-the-top Black Mask with a sinister charm and hair-trigger anger that made his character’s unpredictable violence believable. Side note: When McGregor was serenaded to the tune of “Diamonds Are A Girl’s Best Friend,” a callback to one of my favorite movies “Moulin Rouge,” I almost lost my mind.

Overall, I came for the girl power and stayed for what will easily be one of my favorite movies of the year. I implore you to go see “Birds of Prey,” not only because it is an incredibly entertaining time, but also because these are the kinds of movies we need to support. We need to vote with our wallets and show Hollywood that female-led films with diverse casts are the movies we want to see. I know I for one would love to see a Harley Quinn and Poison Ivy team-up in a sequel … or, you know, Harley Quinn and her sidekick breakfast sandwich.