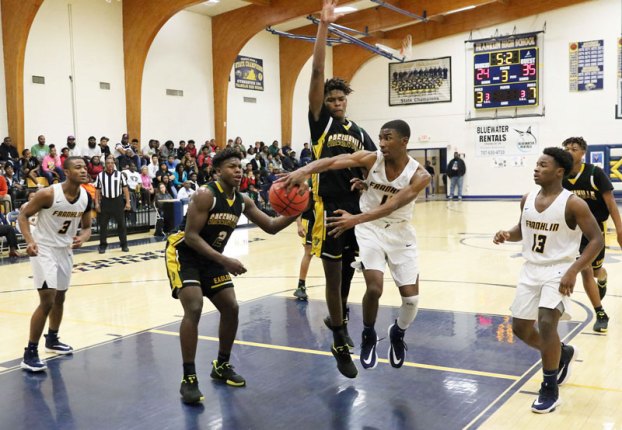 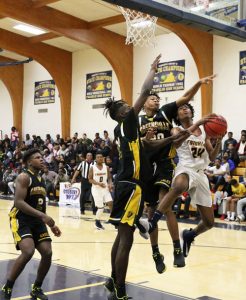 Daemari Holden tries to get off a shot on a drive. — Frank A. Davis Tidewater News

The Eagles brought their height and quickness to the game and jumped out quickly with an 18-8 first quarter lead. For the home team, Derrick Perry tried to keep it close as he dropped in two 3-pointers in the first quarter.

Adding defense to their weapons they held the home team to only five points in the second quarter to hold a 28-13 lead at the end of the first half.

At the 4:11 mark of the fourth quarter, the Broncos’ fighting hard managed to close the score to 34-39. But by the 2:34 mark, the Eagles cranked up their lead to 46-37 and held tight until the final horn.

Broncos head coach Robbie Cutchins said after the game, “My hat is off to Greensville, a great basketball team. I think they are ranked No. 8 in the state in division 2-A. I don’t think there is nobody sitting in this gym that was watching the first quarter of play would have thought that it could be a 5-point basketball game with 4.5 minutes left in the game.

“We made some adjustments at half time to help us get back in the game. We hit some big shots in the third quarter. We had to foul in the fourth quarter and that stretched it out a little bit. Just proud of my guys and what they have done this season. and doing the best that we can to put ourselves in a good spot for the regionals.

In scoring, the Broncos had one player in double figures and that was Myroen Barrett with 11 points.

The Eagles had two players in double figures. They were Zykeem Fields with 19 points and Zavion Franklin with 14 points.

Layla Battle draws a foul on a drive to the basket. — Frank A. Davis Tidewater News FRANKLIN It was... read more