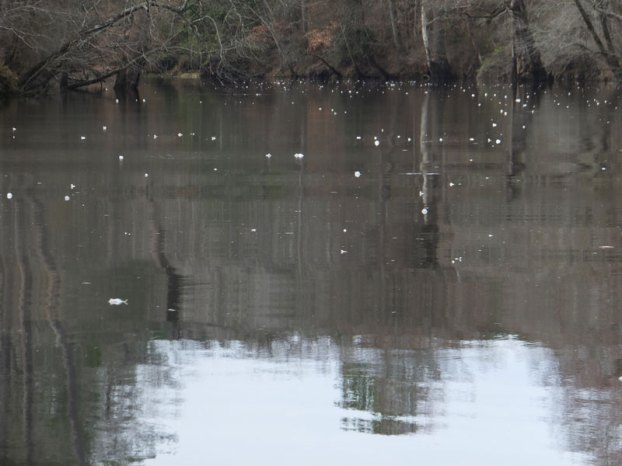 The RiverGuard saw all this down on the Blackwater River. It came from a goose that was plucked by an eagle. -- Submitted Jeff Turner

Spirit of Moonpie and I spent the 2nd through the 4th on the Blackwater above Burdette. The water was 41 degrees, clear and fast and 5.82 on the USGS gauge at Burdette. Air temps ranged from 41 to 70 degrees. It was terribly windy that first night and I saw my first skeeter of the year the next day.

Trash was very bad on this part of the river this time. I picked up 45 pounds worth. Most of it downriver from the Burdette Bridge. There is shore fishing going on from the IOW County-side near the bridge and the Southampton side where the old road cuts off. Those people just trash the place up terribly. I also saw people fishing from the bridge again. That’s illegal and dangerous for them and dangerous for us that have to dodge the lines in our boats.

I also came across a piece of black plastic-like driveway-size pipe floating in the river about 7 feet long. I could not even begin to get it in the boat it was sooo heavy. Maybe some able-bodied people can get that out here soon. It was just about where that little club house is on the right going downriver from the Route 603 boat ramp at the Steel Bridge.

The fishing on this trip was great. I caught about 15 Blackfish after finding them in a different place than I usually do. They were following around a large school of white catfish in 24 feet of water. I also caught a bunch of catfish while jigging for the Blackfish. Two of the Blackfish were over 8 pounds, but not quite citations, darn it. It was a lot of fun chasing that school around. I also caught a nice gar after finding a school of them. I could tell that’s what they were on sonar by the elongated shapes. So that was fun verifying I knew what I was seeing on the sonar. I also caught a 4.1 pound Chain Pickerel that was a citation, and a couple of small bass jigging.

I had a new unusual experience this trip, that’s what keeps it so interesting out there for me. On the first day I came across a wild goose that had been killed and the breast meat removed from it and chunked in the river. I was like, ‘Well, OK. The turtles will get it.’ On the third day as we were heading in Moonpie hollered, “Hey there’s a bald eagle,” and about that time I saw the mighty white-headed bird take off from the side of the river bank. I was reaching for the camera, but of course it was too late.

That’s when I noticed the darn river downriver from our location was covered in … down. That eagle had been on the dead goose a-plucking it like crazy. I mean the river was covered. Anyone who has ever plucked one knows there is a lot of feathers on them things. So it was that one goose down that made the day of the eagle on the two rivers we call the Blackwater and Nottoway.

By Kristi Hendricks Could you possibly ask more of a landscape shrub than to display attractive foliage year-round and live... read more