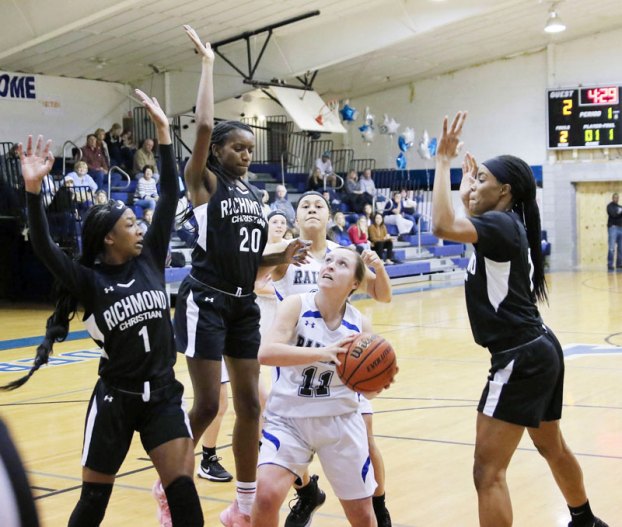 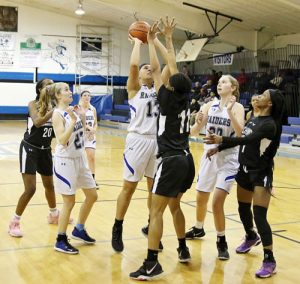 Covanna Bynum gets a shot off in the paint. — Frank A. Davis Tidewater News

The Southampton Academy Lady Raiders girls’ basketball team had their hands full as they faced the aggressive, explosive Warriors of Richmond Christian School in Southampton Academy gym on Monday. The end result of the game was a 29-64 loss for the home team.

There was a bright side of the loss as the home team did lead very briefly at the 4:24 mark in the first quarter with a score of 4-2. But that was all that they scored for the first quarter and the Warriors pumped in 15 points. Another plus for the Lady Raiders is that they also outscored the Lady Warriors in the second quarter by 8-6 points. Still they were behind at the end of the first half with a score of 21-12.

Although the Lady Warriors opened the final quarter leading 34-18, they did not lighten up or send in substitutes. They exploded even more outscoring the Lady Raiders, 30-11.

In scoring for the Lady Raiders, two were in double figures. They were Katelyn Holland with 11 points and Kailey Hurst with 10 points.

For the Lady Warriors, both Prophat Sheffield and Ta’Nya Outten, who scored 19 points apiece.

Southampton Academy Lady Raider head coach Rebecca Fretz commented after the game, “I thought that my girls played well. They just needed to move their feet a little more, but they came out and fought a good fight.”