WINDSOR — Our Dad has gone home on 01/30/2020. To meet him on the other side are his folks, Charles L. Augustine Sr., Vera Watson Keyser (Bob); his son, Matthew Wesley Augustine; and his baby sister, Julia LuAnn Nettles. 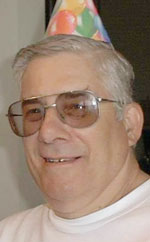 He leaves behind his eldest daughter, Victoria A. Saunders, her husband, John R. Saunders III, and their son, Wesley Dakota Holland, aka “Bean;” youngest daughter, Jennifer Augustine-Roman, aka ”Button,” her husband, Pete Roman, and their son, Brennan Lee Turner, aka “ButterBean;” mother of his children, Sarah Bryant Hesters of Florida; sister, Donna A. Lawson of Windsor, Virginia; brother, Gary Augustine of California; and his cousin, Stanley Watson and wife, Donna, of Windsor.

Dad was born on Jan. 10, 1946, at Lejeune military base in North Carolina, but he grew up in Tustin, California. We grew up listening to his stories of surfing the Wedge, drag racing down the strip and, of course, all the beautiful California girls.

Dad then joined the Navy onboard the aircraft carrier Franklin D. Roosevelt, where he was able to work with the aircraft that fascinated him. While stationed in Jacksonville he met and fell in love with another beach babe, our mother. They moved back to Virginia, and although it didn’t last the result was we had a Dad who was our most fiercest protector and provider. Late-night runs for milk shakes, teaching us all to swim, drive a stick-shift and shoot a gun. Beach days and late-night movies were some of his favorite things he shared with us kids. The stories of the Hollywood stars he met, and he could tell you who starred in all those black-and-white movies, but his favorite was, of course, The Duke.

We never wanted for stray dogs, chickens, ponies or hot rods to cruise in.

Dad spent over 30 years at Union Camp (International Paper) on “old number 11” in sheet-finishing. He would chide us kids when we went to Franklin about that awful smell and he would say, “Kids, that smell is food on your table and clothes on your back.” He was not perfect by any means, but we never doubted that we were taken care of and loved. He was larger than life and will be missed beyond measure.

Donations to the Windsor Volunteer Rescue would be appreciated.

We would like to express our most sincerest appreciation to the nursing staff of Sentara Obici ICU for their compassion that was above and beyond. We could not have asked for better care and support. They were our heroines in our time of need. Nurse Sandy, thank you is not enough, you will forever be in our hearts.

No service will be held. WE will take care of Dad ourselves as he took care of us.