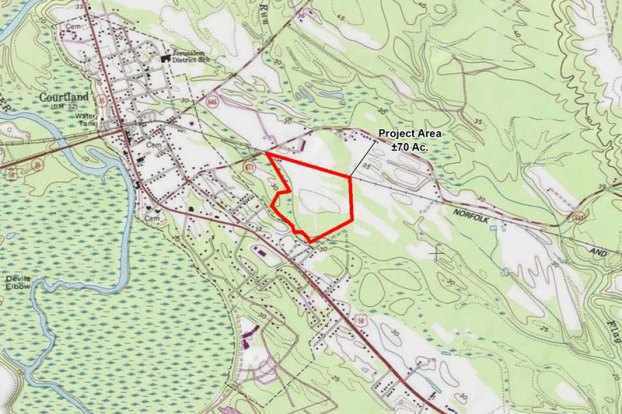 Board denies rezoning for solar project

Southampton County’s Board supervisors voted 6-0 to deny the request to rezone land for the purpose of building a utility solar energy project on 39 acres. This decision, which included one abstention, came after many presentations on both sides during the scheduled public hearing on Tuesday night.

Beth Lewis, secretary of the Planning Commission, first briefed the board and audience as to the nature of the application. Arick Wilson, North Carolina Renewable Energy, was making the request on behalf of Cathie Bradshaw. According to the proposal, the property in question is on the southside of Flaggy Run Road, about 2,100 feet northeast of its intersection with Linden Street in Courtland, all within the Jerusalem voting and magisterial districts. The property also lies right behind the back border with the Heritage Village and Agricultural and Forestry Museum.

Lewis noted that when the matter came before Planning in December — also after much discussion — the motion to recommend the amendment failed because of the 4-4 tie and absence of one member.

She was questioned by supervisors, including vice chairman William Hart Gillette, who asked if there’s “a problem that the runoff will stay on site.” To which Lewis replied, “That’s the law.”

Chris Cornwell asked about security, and got confirmation that a 7-foot-tall barbed wire fence would be erected. Carl Faison was told the panels would be on farmland. Gillette said he saw no resolution to complete decommissioning in 20 or 30 or 35 years. To which he was told there would be 90 days granted to remove the materials. Also, the soil could be restored with grass to become a meadow.

“I’m concerned about taking perfectly good soil — good land – and there’s guarantee it will be restored. We don’t want to move toward poverty … Meadows are pretty, but there’s a lot of meadows that can’t grow bountiful crops.”

As for his question of whether or not the “average county resident” would benefit from the project, such as access to the generated electricity or even lower power bills, Lewis said, “The energy goes where it’s needed. That’s what’s happening with Southampton Solar [in Boykins and Branchville].

Then the vice chairman asked what would happen if the company goes broke in spite of the required bond. Richard Railey, attorney for the County, said bond is reviewed every five years, and could be called if the business became insolvent.

“The ones [companies] with deep pockets will keep you tied up in court until we have to pay for it,” Gillette replied.

Cornwell wondered about how many jobs the project would generate, and was told one to two full-time employees are possible, and would be hired for maintenance purposes.

Dr. Alan Edwards, chairman, said “I have a lot of concerns. I just don’t see how that bond’s going to pay. That decommissioning will cost more than construction.”

Whitney Saunders of Suffolk, the attorney representing Cathie and Lloyd Bradshaw, became available to answer questions. With him was Tim Barker of the company, who told the board that multiple tests had been done at the sites. But per Gillette’s question, he said he couldn’t guarantee the productivity of soil per Gillette’s question, but added there would be zero contamination because the supports are made of steel, “the same as road signs.”

“I hope no one here lives long enough to see a mistake made,” said the vice chairman. “It’s very problematic to me.”
Saunders said to the board, “We’re not going to be able to solve global warming tonight. This is about individual property rights to consider. Several years [about two] you went through [a process] to create an ordinance. Solar power is worth considering.

Bradshaw herself then came forward. A self-described county resident of 50-plus years, she said the couple was approached on the matter about two years.

“After much thought, several meetings and discussion we decided to allow this [leasing the property].

Now we have this once-in-a-lifetime opportunity,” said Bradshaw. :We own the property free and clear, and it’s out God-given right to decide for myself how I want to use land for my family’s benefit without hurting anyone. I have no desire or right to tell others what to do with their land.”

She asked the board to “Respect my right as a landowner how to use my land, and consider the merits of this one project.”

Lloyd followed, stating, “This is a win-win situation. We felt it’s a win for the county and renewable energy. What we are asking is to allow us to use our property for what is considered a lawful use. We hope you will consider these things in your deliberations.”

Then came the public.

• Robert Wallace of Freeman Road acknowledged that the attorney did a good job representing his client, “But what about rest of property owners that need to be represented? Who is going to be harmed if decommissioning goes wrong? The revenue is of little benefit to the county, the rest is going elsewhere. I am asking you as a citizen to not pass project without more information. Table it until far more information is available, or just cancel it.”

• Ash Cutchin said he learned that the solar farm project in Accomack County apparently does not have anyone local hired. “Too often people ask to respect property limits, but property rights have a limit.”

• Joe Vick said, “It wouldn’t hurt to slow down and put on the breaks. Don’t approve until the Comprehensive Plan comes up for review in 2024 is my suggestion. This has all been happening too fast.”

• Hunter Darden said, “I want Southampton County to stay an agricultural county. Don’t tell me you can’t stop it [the project].” As for returning the land to its former state decades from now, “It will never happen.” To the board, he added, “Get our faith back. I call on you to look out for Southampton County.”

• Gary Cross said the solar panel industry “will kill the economic engine that runs this county. How many farmers will be put out of business? This is about the economic impact each time we remove resources. Corn crops can do more [to filter land and water] than rain forests. … It would be neglient of the board to approve this. Poll the citizens and ask: Agriculture and forestry or fields of glass solar panels.?”

• Blair Bunn of Newsoms said he lives in midst of solar panels. “You’ll never walk on the land again. Never use it again.” Further, fire ants have invaded his property where greenery was brought in and put around the solar farm. “My farm is eaten up with fire ants. Let’s get accountability.”

• Westley Drake, also of Newsoms, said he’s familiar with topic from two or three years ago. “I’ve yet to be convinced solar is [beneficial]. This is an unethical way to claim to produce clean energy.” Drake added that he thinks such companies as North Carolina Renewable Energy view Southampton as “a pushover. ‘We can sell them on green energy.’” The 29-year-old also noted that four past board members “sold out” when they voted to approve the farms in the county. “Three were not reelected.”

• Lynda Updike, supervisor for Newsoms, said, the proposed utility farm is “Not in best interests to Southampton County Agriculture. “We have the top tier of farmland. A solar farm encroaches on it.”

• Robert White for Franklin District said his biggest concerns are for land owner rights. “The biggest thing that upsets me is the company will put up millions, but not pay machinery taxes.”

• Carl Faison for Boykins District said, “This is a small place. If there’s going to be solar panels placed and have least effect, this is the place. There will be others forthcoming. If tabling could be done, I would be in favor, but I’m not in favor of saying no. Ultimately, though I would vote to deny.

• Drewryville District Supervisor Dallas Jones said, “I’ve been here awhile and heard about rights of property. If we don’t let them [the Bradshaws] have it, what’s going to happen to all of us?”

• Cornwell asked people who are county property owners to stand, with the majority of the audience members rising to their feet. “This is not a surprise to me,” he said. “I did research and this would create zero jobs.”

• Edwards: We’re charged with doing the best for the people. I have some difficulties. I don’t think it fits in with the Comprehensive Plan. It would be very close to Courtland and the water source. Decommissioning is still fuzzy. There is a lot of nebulous things there. I have been told the panels will be out of date in five or six years. The negatives outweigh positives. I really resent the controls by the state, which doesn’t know or care about Southampton County.”

When it came to voting, Updike made the motion to deny the zoning amendment application, with Cornwell seconding. All but Jones agreed to turn down the request. Jones, who had stepped away from the board, had his voted counted by Edward as an abstention.

Because this request fell through, the board did not have to go through a public hearing for a conditional use permit.

Of note is that in late-arriving matters, the board unanimously agreed to ask Planning to review the existing Utility Scale Solar Ordinance [Chapter 18, Article XXII of the Southampton County Code] and provide its recommendations about potential revisions.

COURTLAND Southampton County’s Department of Social Services hopes to collect 400 boxes of Band-Aids for its clients by March 31,... read more