Maj. Herbert T. Williams V, a 2004 graduate of Franklin High School, has been named the school’s alumnus for January. 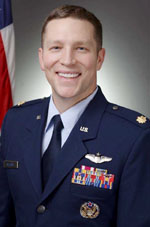 According to a biography sheet provided to the school, Williams is an Air Force Strategic Policy Fellow assigned to the White House Office of Science and Technology Policy in Washington, D.C. There he advises the Chief Technology Officer of the United States on a variety of aviation technologies including unmanned aircraft, civilian supersonic aircraft, and urban air mobility. He coordinates policy between Federal agencies and works with industry and regulators to unleash innovation and ensure America is the world leader in aviation technology in accordance with the vision of the President of the United States.

A native of Virginia, Williams received his commission from the Virginia Military Institute in 2008. A career MQ-1 and MQ-9 instructor pilot and weapons officer, he has served at the Squadron and Group levels. Prior to his current position, Williams was the Iran Branch Chief and Airpower Strategist at Checkmate, the premier strategy organization for Headquarters Air Force in the Pentagon.

He has deployed in support of Operation New Dawn and Operation Enduring Freedom. He has over 2,200 flight hours including 1,800 combat support hours in seven different areas of conflict.

January FHS Employee of the Month

Tawanna Bernard FRANKLIN The January FHS Employee of the Month is Tawanna Bernard. She is a jack-of all-trades with so... read more