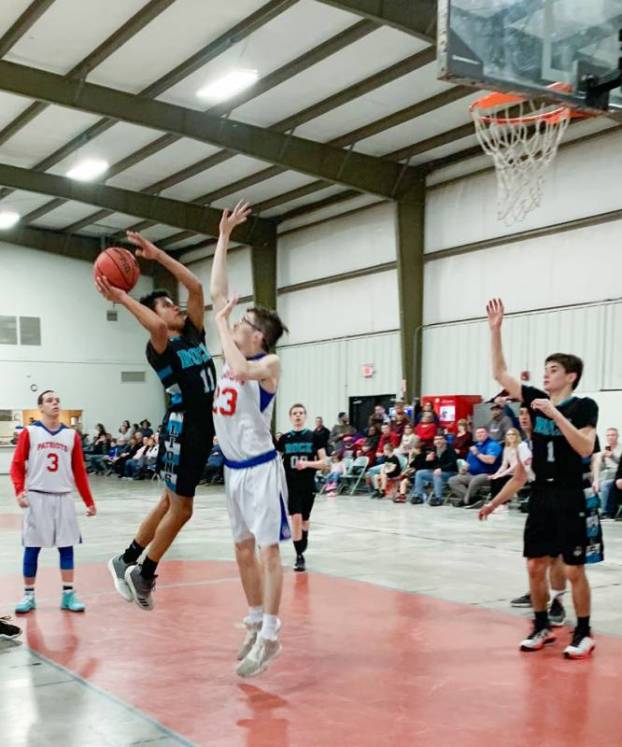 Christian Fanjul puts up a floater in the lane while his teammate Luke Blythe looks on. -- Submitted Patty Dillon 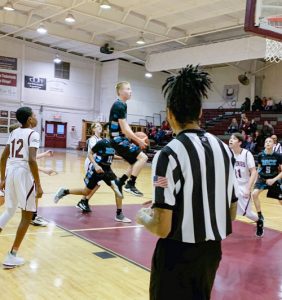 D.J. Dillon takes off and finishes at the rim. — Submitted Patty Dillon

The Rock Lions move to 6 and 1 on the season with a recent win over Albemarle on Jan. 17 by a score of 53 to 35. Albemarle kept it close at halftime, but the Rock Lions defense was too much for the Patriots in the second half. Rock was led by D.J. Dillon with a high of 31 points. Cole Butler and D.J. Dillon pulled out 3 assists each. Following them was Luke Blythe and Christian Fanjul with 2 assists as well as 4 rebounds each.

Coach Danny Dillon said, “We are one of the smallest schools in the state so any win is a big win. I love how these young men compete even when basketball may not be their first sport.”

Two days prior, Rock Lions lost to a large school in Richmond, Banner Christian School, with a final score of 74-65. Knowing they were up against a tough team, they played their strongest. D.J. plowed through with a high of 43 points and three assists. He knocked down 6 threes as a part of that scoring run. This mark put him in the top five scoring outings in Rock Church School history.

“Super proud of my son, D.J. He is using his gift to glorify God,” said Dillon. “It’s not about the points but how he loves on his opponents during the game. I’ve seen him give high fives to the opponents after they made a free throw. That’s what it’s truly about.

“We look to show God’s love in each and every game while competing at our best.”

FRANKLIN Frank A. Davis | The Tidewater News In the JV game last Friday between Southampton and Franklin, the Indians... read more