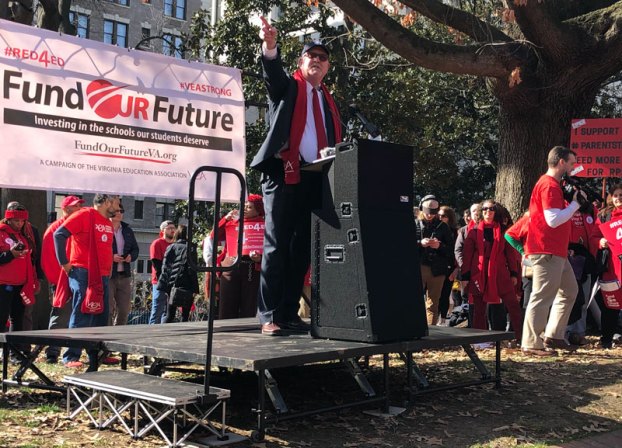 VEA President Jim Livingston addresses the crowd, "Last year we demonstrated our power to tell the General Assembly that it is time, it is past time, to fund our future." -- Courtesy VSU Capital News Service

Hundreds rally at the Virginia Capitol for education reform

Bells chiming through Capitol Square were drowned out Monday as hundreds of education advocates dressed in red chanted for lawmakers to “fund our future.”

The Virginia Education Association and Virginia American Federation of Labor and Congress of Industrial Organizations organized the rally to restore school funding to pre-recession levels, increase teacher pay and reinstate collective bargaining. The VEA is made up of more than 40,000 education professionals working to improve public education in the commonwealth. Virginia AFL-CIO advocates for laws that protect current and retired workers.

An estimated 600 to 800 people attended the rally, according to The Division of Capitol Police. Participants wore red in support of Red for Ed, a nationwide campaign advocating for a better education system.

Richmond Public Schools announced last week that it would close for the rally after a third of teachers, almost 700, took a personal day to participate.

“We are proud that so many of our educators will be turning out to advocate for RPS and all of Virginia’s public schools,” RPS Superintendent Jason Kamras stated in a press release.

“Last year we demonstrated our power to tell the General Assembly that it is time, it is past time, to fund our future,” Livingston said.

The Commonwealth Institute, a Richmond-based organization that analyzes fiscal issues, reported that state funding per student has dropped 7.6 percent since 2009, from $6,225 to $5,749. In addition, public schools in Virginia since 2009 have lost over 2,000 support staff and over 40 counselors and librarians, while the number of students has increased by more than 52,000.

HB 582, patroned by Del. Elizabeth Guzman, D-Woodbridge, proposes the reinstatement of collective bargaining for public employees. According to the VEA, Virginia is one of three states that does not allow collective bargaining, the power to negotiate salaries and working conditions by a group of employees and their employers.

The bill would also create the Public Employee Relations Board, which would determine appropriate methods of bargaining and hold elections for representatives to bargain on behalf of state and local government workers.

“Collectively we bargain, divided we beg,” said AFL-CIO President Doris Crouse-Mays. “The Virginia AFL-CIO and the VEA, we stand hand in hand together.”