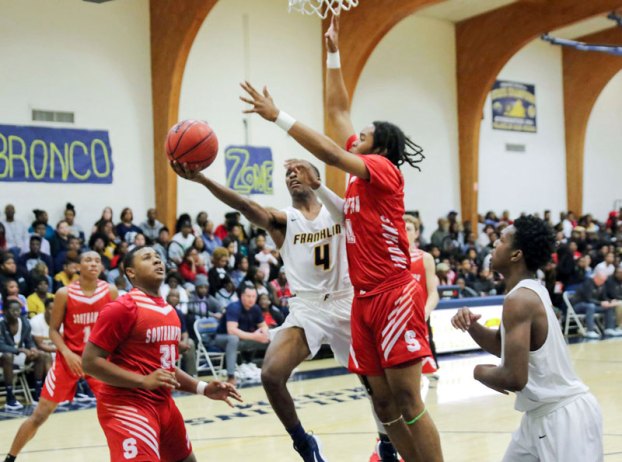 Myroen Barrett tries to get through defense on a drive. Frank A. Davis | The Tidewater News 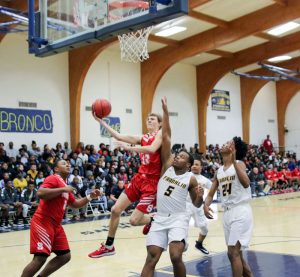 Dale Vick gets ready to release a one-handed shot. Frank A. Davis | The Tidewater News

Franklin High School Principal Travis Felts stated that Peggy Wilkens Gym at Franklin High School was packed to capacity on Friday, as the second great game of the season, “The Back Yard Brawl on the Hard Courts,” between Franklin and Southampton high schools was played. For the second matchup of the season, chalked up a W for the Indians as they outplayed the Broncos to claim a 59-48 win.

The Broncos started out hot and ahead with an 18-12 lead at the end of the first quarter. But how quickly it changed in the second quarter as the Indians awoke and outscored the Broncos 19-6 to end the first half of play with a lead of 31-24. In the second half, the Broncos continued to fight, and at the 1:26 mark in the third quarter the Broncos closed the score to 36-37. But they could not continue that scoring, and the momentum continued for the Indians to hold back any offensive drive for the home team.

Southampton County High School Indians Head Coach Sharone Bailey said after the game, “It was a good, well-fought game here tonight. My guys came out and executed. We had to get one because we lost at home. I am proud of my guys. They played inside and out and protected the ball and shot well from the line tonight. But just a great game tonight.”

Broncos head coach Robbie Cutchins said after the game, “At the end of the day, tonight, a better basketball team won. Hats off to Southampton, they played well on both ends of the floor. It’s just like you look back at the game at Southampton. We have to be able to create turnovers and we have to be able to knock down a couple of shots, but unfortunately tonight we could not knock down any shots, and in the second half when we needed to create some turnovers we were not able to do so. So, at the end of the day that makes it tough. We had to settle for a lot of outside shots because we were not able to get the ball to the rim. But fortunately, we were able to fight back twice and got back in the game. But I am proud of my boys and we are not done yet.”

In scoring, the Broncos had three players in double figures. Myroen Barrett led with 15 points, Kenaz Jones had 12 points and Bryan Powell had 11 points.

The Indians had one player, Ah’Launtae Outlaw, in double figures with 26 points.