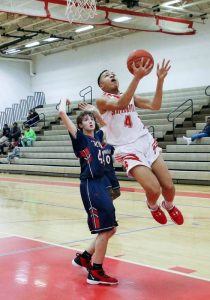 Going high to release a layup on the drive to the basket is Alvin Cannon Jr. Frank A. Davis | The Tidewater News

It wasn’t a good night for the Southampton County High School Indians basketball team as the visiting Colonials of Colonial Heights High School claimed an easy 60-44 win over the Indians. The game was played at Southampton High School gym on Monday.

After a close first quarter in scoring, 10-7 for the Colonials, they went on big runs of 19 and 22 points in the second and third quarters while playing good defense to hold down the scoring of the Indians. With the Indians having many players absent due to the flu, Coach Sharone Bailey substituted freely many players and they were able to score during the game.

Southampton High School Indians head coach Bailey said after the game, “We just came out today a little slow. Had two guys that were out with the flu and another one of my starters was out tonight. We came out a little sluggish and probably still dragging from the Franklin game when they jumped out on us early, but we will be ready on Wednesday.

The Indians were led in scoring by Ah’Launtae Outlaw with 12 points.

In scoring, the Colonials had two players in double figures. They were Alex Bean with 20 points and Shannon Henry with 19 points.

Lady Broncos lose momentum against Lady Indians in second half

FRANKLIN Franklin High’s Amyah Richardson draws a foul during a shot. Frank A. Davis | The Tidewater News It was... read more