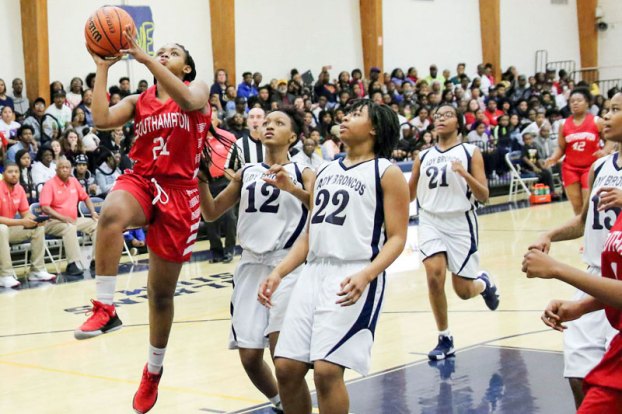 Kayli Hite drives to the basket for a layup. Frank A. Davis | The Tidewater News

Lady Broncos lose momentum against Lady Indians in second half 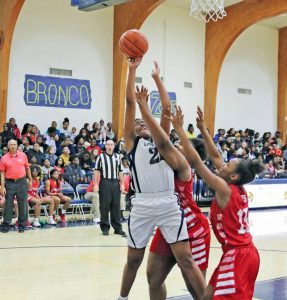 Franklin High’s Amyah Richardson draws a foul during a shot. Frank A. Davis | The Tidewater News

It was standing room only at Franklin High School on Friday as the Franklin and Southampton high schools girls teams tipped off their second match of the season. The Lady Broncos seemed headed to a win as they controlled the scoring for the first half, but went cold in the second as the Lady Indians came back to claim a 36-30 win.

The Lady Broncos scored 11 and 14 points in the first and second quarters to hold a 25-16 lead at the end of the first half of play.

“We should have won the ball game. We did not play up to our potential and we did not play the way I know we are capable of playing. Put-backs hurt us, hustle hurt us. So, we just have to work in those departments, hustling and again working on the put-backs. Those are our areas, and we are going to improve in those areas and we are going to keep on doing it,” said Franklin High School Lady Broncos Head Coach Mona Sumblin.

Southampton High School Lady Indians Head Coach Littleton Parker said, “The kids played a little tight when we started, but they settled into the game, and once we cut it down and took the lead just before the half. I think they settled well in the second half and did a great job. It was a good ball game with two good teams.”

In scoring, the Lady Broncos were led by Jamia Flythe with 13 points.

The Lady Indians also had only one player in double figures, Kayli Hite, with 15 points.