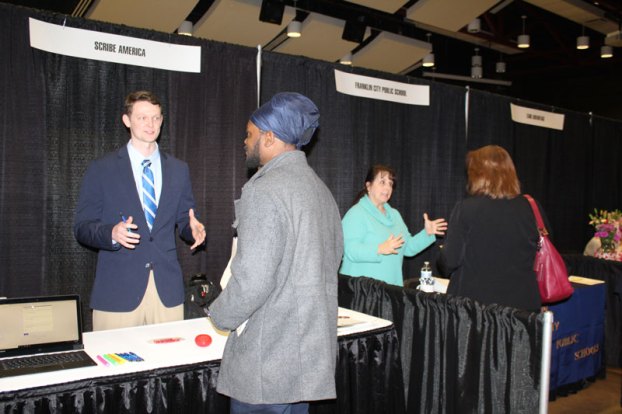 Job seekers had many opportunities at fair 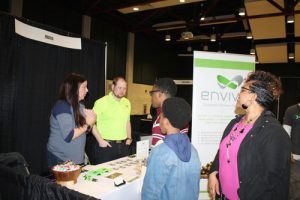 Enviva representatives speak with a visitor to the company’s booth during the job fair on Wednesday afternoon. — Stephen H. Cowles Tidewater News

Over two dozens area businesses, schools, city and county offices were present and ready on Wednesday afternoon to provide information to job seekers during the annual job fair. That took place in the Regional Workforce Development Center at Camp Community College.

Among the attendees was Joslyn Perry of Southampton County, who said she majored in criminal justice in school, and most recently was in Norfolk as a rehabilitation counselor in the Second Chance program.

Speaking of law enforcement, the City of Franklin Police Department and Southampton County Sheriff’s Office, as well as the Virginia Beach Police Department were on the scene looking out for potential recruits to their respective agencies. Master Police Office C. Santiago and Sgt. A. Gregg of the latter group said they had seen a good response from people.

“The biggest reaction we get is to the amount of time it takes to become an officer,” said Santiago. “Give yourself four to six months.”

Down the aisle was Garland Gray Forestry Center, represented by Joshua Bennicoff and Cetia Stainback. They said this is the company’s first time attending such an event in Franklin and were very happy with the interest that people had shown. 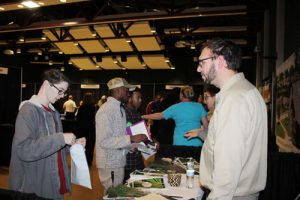 Nathan B. puts in reading materials at the booth for Garland Gray Forestry Center, represented at right by Joshua Bennicoff. Behind him, Cetia Stainback talks with two men interested in the company. — Stephen H. Cowles Tidewater News

After visiting their booth, Nathan B., as he referred to himself, said he was looking that day for work in manufacturing and engineering, though his preference is with the latter since that is his major. Up until this past summer, he was employed at Narricot, but that place closed, compelling a new job search.

Deandaz Gray of Wakefield later mentioned he was seeking warehouse work that day.

Brandon Savage with Scribe America told visitors about the company he represents, which is, essentially a medical scribe service. Employees attend doctors’ consultation sessions with patients and write down what is said and done.

The event was not entirely for job seekers, though. Vendors also got some assistance.

Sponsorship of the event was by IOW Works, FSEDI, Hampton Roads Workforce Council and The Tidewater News.