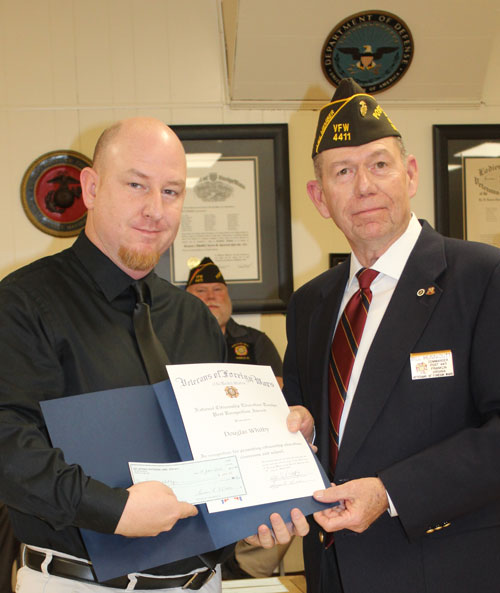 Douglas Whitby of Riverdale Elementary School was named Teacher of the Year by the VFW Post 4411. Presenting a certificate and check is Commander Bill Hunnicutt. -- Stephen H. Cowles Tidewater News 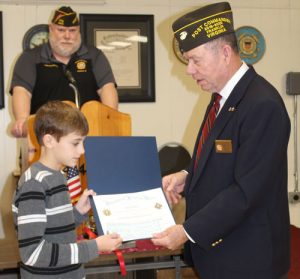 VFW Post 4411 Commander Bill Hunnicutt presents a certificate and check to the winner of the Patriot’s Pen, Jonathan Jennings, for his essay, “What Makes America Great.” In back is Senior Vice Commander Stanley Crawford. — Stephen H. Cowles Staff Writer

Members of the Sgt. (USMC) Jayton D. Patterson VFW Post 4411 gathered on Saturday afternoon to celebrate a special occasion to the group, its 50th anniversary.
“Today is a very special day,” Commander Bill Hunnicutt told all present. He called up Tommy L. Harmon, a charter member from when the post was begun on Jan. 20, 1970. As noted in last Wednesday’s article (“Charter VFW member recalls post’s beginnings,” Jan. 15, 2020), Harmon was unable to be present for the charter signing, but has remained active by serving in all leadership positions, including twice as commander (1985-1986 and 1993-1994). Called to the front, he got to hang the anniversary declaration on the front wall.

“The men and women who served, fought together, came together to establish the post. It’s about comradeship. Our little post has made a difference in the lifes of other veterans. We’re ‘The little post that could.’ It shall also stand for the next 50 years.”

Three awards were then presented, the first was Teacher of the Year, going to Douglas Whitby, a history teacher to fifth graders at Riverdale Elementary School. Hunnicutt stated that Whitby was described in the nomination form as “someone who makes history come alive.” Further, the instructor is active in organizing the school’s annual Veterans Day programs. A certificate and check were presented to Whitby. 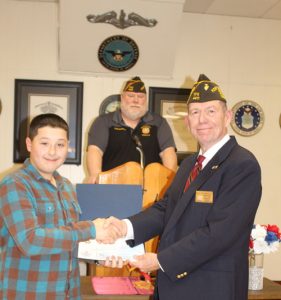 Joaquim Steele is presented a certificate and check from VFW Post 4411 Commander BIll Hunnicutt for the essay he wrote for the Voice of Democracy competition suited to his grade level, 7-12. “What Makes America Great” was the same theme. Senior Vice Commander Stanley Crawford is in back. — Stephen H. Cowles Tidewater News

The audience got to hear a recording of Jonathan Jennings reading his essay for the Patriot’s Pen contest. The theme was “What Makes America Great.” Among those qualities, he said, are unity, our military, technology and the four freedoms: speech, to bear arms, religion and press. Jennings was also given a certificate and check.

Joaquim C. Steele won for the Voice of Democracy contest. He also wrote on the theme “What Makes America Great,” and received in appreciation a certificate and check.