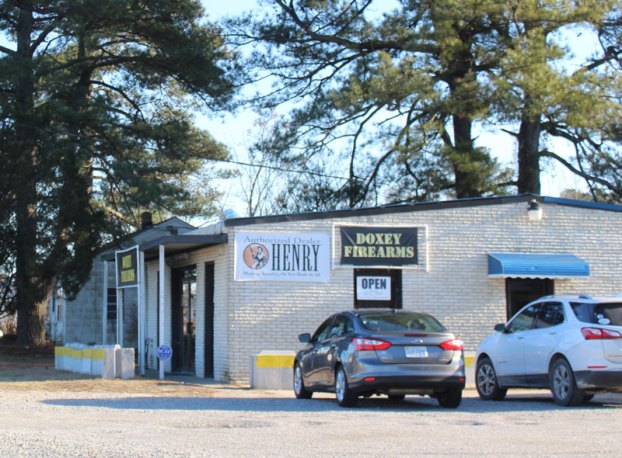 Doxey Firearms in Courtland has seen an uptick in purchases of AR-15 rifles, high-capacity handguns, high-capacity magazines and bulk ammunition since the November 2019 state election, which saw Democrats win a majority in Virginia’s General Assembly for the first time in more than 20 years. -- Stephen Faleski Tidewater News

Gun sales on the rise in Southampton County

The prospect of new gun laws being passed now that Democrats hold the majority in the Virginia General Assembly is likely the reason behind a spike in firearm sales during the past 2-1/2 months, both locally and statewide.

According to Sgt. Michelle Anaya, spokeswoman for the Virginia State Police, the VSP conducted 55,086 background checks for firearm purchases in November 2019, another 73,849 in December and more than 36,000 in January 2020 as of Jan. 16. The November figure amounts to a 25.4-percent increase over the total reported for November 2018, with the December figure representing an even higher increase, 46.7 percent, over the total for that month in 2018. While Anaya explained that there is no VSP database that breaks down these totals by locality, John and Dawn Doxey, who co-own Doxey Firearms in Courtland, confirmed that Southampton County is no exception to the trend.

Southampton County’s sole gun store, the latter Doxey said, has seen a notable uptick in business since the November election, particularly in sales of AR-15 rifles and high-capacity handguns — weapons that may become illegal should House Bill 961 become law.

According to Virginia’s online legislative information system, HB 961, which is sponsored by Del. Mark H. Levine (D-45), would expand the definition of “assault” firearms and would make the import, sale, transfer, manufacture, purchase, possession or transport of said weapons a Class 6 felony. The bill would further make it a Class 6 felony to import, sell, transfer, manufacture, purchase possess or transport large-capacity firearm magazines, silencers and trigger activators. It does, however, allow anyone who already owns such weapons or accessories to retain ownership until Jan. 1, 2021, or longer if that person has obtained a permit from the Department of State Police. The bill, as of Jan. 7, has been referred to the House Committee on Public Safety, which is comprised of 13 Democrats and nine Republicans, and will meet today, Jan. 22. A similarly-worded state senate bill, SB 16, was stricken from consideration by the Senate Committee on the Judiciary at the request of its patron, state Sen. Richard L. Saslaw (D-35), on Jan. 13.

While Doxey declined to share exactly how many AR-15 rifles her business had sold since November, citing confidentiality, she pointed out that AR-15s are only one item that has seen an increase in sales. Sales of high-capacity magazines and bulk ammunition are also up.

“I would attribute the increase almost entirely to the November election results,” she said. “People are extremely upset about these new possible restrictions.”

The number of concealed handgun permit applications filed at the Southampton County Courthouse, however, hasn’t fluctuated significantly since the November 2019 election, according to Circuit Court Clerk Rick Francis. Court records indicate the Clerk’s Office processed 54 concealed handgun permit applications in October 2019, followed by 41 in November and 53 in December.

Concealed handgun permits, he explained, require an application, proof of firearms training and $50, and normally take less than 45 days from the date of the application to be issued, during which time both the sheriff and the Commonwealth Attorney’s Office have the opportunity to review records and provide input. The presumption, however, is that an applicant is entitled to a concealed handgun permit unless and until the applicant is shown to be ineligible, Francis said, adding that even if a applicant is denied, there is a process where the applicant can request a hearing before a judge.

Despite anticipating a negative impact to her business, should the restrictions outlined in HB 961 and SB 16 ever be enacted, Doxey said she and John would still abide by state law regarding all firearms sales, while continuing to support any political candidates in future elections who run on platforms of reversing those restrictions.

“Gun stores in other states that have passed similar laws are forced to sell ‘state compliant’ models, which do not have many of the more desirable features currently available on firearms that can be sold in Virginia,” Doxey said. “I would assume the loss of those desirable features would cause prospective customers to lose some purchasing enthusiasm.”

“These checks include producing proper identification and completing a state and federal form,” Doxey said. “Then the customer must wait for an approval code from the Virginia State Police before the sale can proceed.”

Doxey Firearms also pays close attention to the behavior of potential customers to prevent possible straw purchases, she said, which occur when a person buys one or more firearms intended for someone who is prohibited from owning a gun.

“If you are prohibited from purchasing a firearm, your background check application will be denied by the Virginia State Police,” Doxey said. “The system does work, and people do get denied for a wide variety of reasons.”

SEBRELL Members of the Sebrell Civic Club are getting things ready for what will be the group’s 65th annual dinner... read more