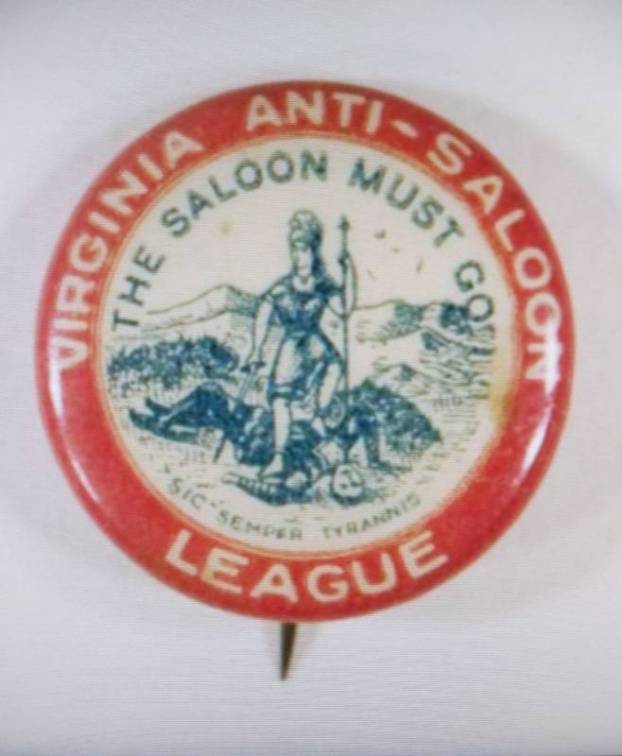 The Anti-Saloon League produced these pins as a way to advocate for for the prohibition of making alcohol. In 1920, Dr. Rufus L. Raiford of Sedley had been asked by the state headquarters to serve as chairman of the group's efforts in Southampton County. -- Submitted Clyde Parker

Led by Dr. Rufus L. Raiford, Southampton County is joining in on the nation-wide effort to prohibit alcohol production and distribution. A national organization, called the “Anti-Saloon League of America,” is leading the movement.

Dr. Raiford’s involvement is in response to a request from headquarters of the Virginia Anti-Saloon League that he serve as Southampton County’s chairman.

Dr. Raiford of Sedley, one of our county’s foremost citizens and a leader in every worthy movement for civic welfare, is making a final appeal through The Tidewater News this week for the Anti-Saloon League’s campaign for law enforcement. The League expects to raise a fund of $25,000,000 in the United States to be used for enforcement of the national prohibition law, supplementing the efforts of federal and state governments and their enforcement officers.

Virginia’s quota is $750,000. Southampton has been asked for $10,000. Dr. Raiford has effected an organization in each of the seven county magisterial districts with well-known citizens as district chairmen. They are: T.A. Saunders, Berlin-Ivor; Reverend Porter Hardy, Boykins; L.W. McGrath, Capron; F.E. Pope, Drewryville; R.E.L. Watkins, Franklin; Dr. W.T. McLemore, Courtland; and R. Howard, of Newsoms. Dr. R.L. Raiford of Sedley is Southampton County Chairman and W.H. Drewry of Sedley is County Treasurer. On account of the short time allowed in which the fund is to be secured, the Southampton campaign has been extended for a few more days.

Dr. Raiford announced yesterday the coming of the Honorable Wayne B. Wheeler, national counsel for the Anti-Saloon League of America, who will speak at the Franklin Congregational Christian Church on Jan. 26 at 8 o’clock in the evening. Many experienced critics say Mr. Wheeler’s oratory skills match that of William Jennings Bryant. Dr. C.H. Roland, Franklin Christian Church Pastor, will also speak.

However, actual enforcement of the legislation was slow in coming about. In some cases, for an extended period of time, enforcement was actually non-existent in some areas of the country.

Although legal prohibition had succeeded and was supported by many people, in actuality, millions of Americans were still willing to drink alcoholic beverages. Because the law did not specifically outlaw consumption, many people stockpiled alcohol and figured out ways to obtain it. This gave rise to bootlegging (illegal production, sale and distribution) and “speakeasies” (illegal and secret drinking establishments) which were capitalized upon by organized crime. Gangsterism and turf battles between criminal gangs were prevalent.

Locally, here in Southampton County, there were still some establishments that were classified as saloons. In Franklin, alone, there were several such establishments — especially, up and down Main Street, on First Avenue, and along Railroad Avenue. And, a good number of illegal production facilities (sometimes called “liquor stills”) were in operation, especially in rural areas.

So, even though legal prohibition, in accordance with the 18th amendment, extended from 1920 to 1933, official and legal enforcement of it was very difficult. In support of federal, state, and local law enforcement, to help counter the many and varied violations of the law, organizations such as the Anti-Saloon League sprang up throughout the country. Of course, the Women’s Christian Temperance Union had been in existence for decades; and, a great number of churches had long been in opposition to alcohol in all its forms.

In the long run, it became obvious that prohibition had caused far more problems than it had solved. Of much concern, was the increase in criminal activity, public corruption, and, in general, a prevalent casual disregard of law. An organization called “Women’s Organization for National Prohibition Reform” was at the forefront of the movement to REPEAL the prohibition law.

Bessie Hill looks over some fresh apples for sale in the store. Hill said she comes in once a week... read more