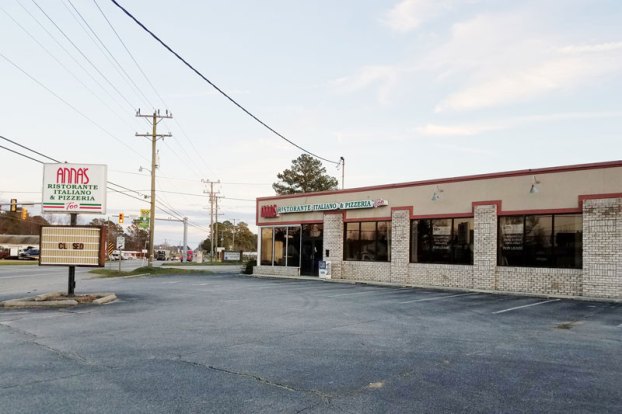 A couple from Tarboro, North Carolina, has filed a conditional use permit application with the Town of Windsor to convert the former Anna’s Ristorante Italiano & Pizzeria Too building into an establishment that would offer pay-to-play, casino-style video games with cash payouts for those who win. The restaurant relocated to the Windsor Plaza shopping center in 2018. Stephen Faleski | The Tidewater News

A Tarboro, North Carolina, couple hopes to convert the former Anna’s Ristorante Italiano & Pizzeria building at 15 E. Windsor Blvd. into “Reba’s Gaming Parlor,” an establishment that would offer pay-to-play, casino-style video games with cash payouts for those who win.

The matter will go before the town’s Planning Commission on Wednesday, Jan. 22, as the couple — Tony and Reba Blackley — has applied for a conditional use permit. According to Tony, the establishment would include computer games, multi-player, table-mounted video games known as “fish tables” and what he termed “stand-ups,” defining the term to mean, “like what you would see in a casino.”

Patrons, he explained, would pay at a cash register and receive a number to type into one of the machines, which activates the game. Payouts would also be handled via the cash register.

“You can win cash,” he confirmed.

According to Lt. Tommy Potter, spokesman for the Isle of Wight County Sheriff’s Office, most forms of gambling are illegal in Virginia, except for games of chance conducted in private residences; bingo games, raffles and duck races conducted by certain organizations, such as Ruritan Clubs; horse racing with licensed pari-mutuel wagering; and any lottery conducted by the Commonwealth of Virginia. As of 2019, the General Assembly has further authorized five Virginia cities — Bristol, Danville, Norfolk, Portsmouth and Richmond — to have casinos, provided their local governing bodies approve the idea. Yet, according to Town Manager Michael Stallings, the Blackleys’ proposal isn’t technically in violation of any state laws.

Town Attorney Fred Taylor added that the machines the Blackleys plan to use are supposed to come with certifications stating their compliance with Virginia’s exception for “games of skill” — an exception that may be short-lived if two bills currently up for debate in the General Assembly become law.

House Bill 881, introduced by Del. David L. Bulova (D-37) proposes to include skill games within Virginia’s definition of illegal gambling. “Skill games” are defined in the bill to mean any electronic, computerized or mechanical device that requires the insertion of a coin, currency or other form of token or ticket to play, the outcome of which is determined by any element of skill of the player, and which may deliver or entitle the person playing to receive cash, cash equivalents, gift cards or other types of vouchers or credits that can be exchanged for cash, merchandise or anything of value. This is regardless of whether the payoff is made automatically from the device or manually. The bill exempts family entertainment centers from the prohibition, provided that the prizes won are non-cash merchandise or a voucher or credit redeemable only for a non-cash merchandise prize, subject to additional requirements. State Sen. Thomas K. “Tommy” Norment (R-3) has introduced an identical bill, SB 908, in the Senate.

The Planning Commission meets at 7 p.m. in the Town Council chamber of the Windsor municipal office, 8 E. Windsor Blvd.