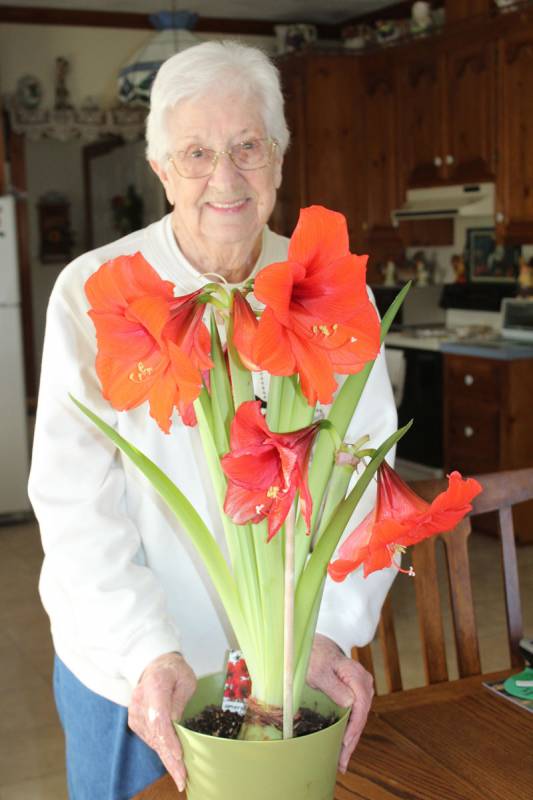 Syble Whitley of Franklin is thrilled that a single amaryllis bulb has produced so many stalks and blossoms, more than she's ever experienced in her life. -- Stephen H. Cowles Tidewater News 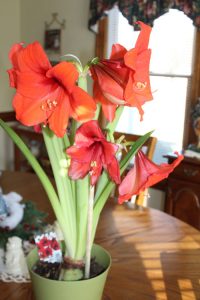 The three stalks have produced five blossoms each, more than Syble Whitley has ever seen from such a plant. — Stephen H. Cowles Tidewater News

Syble Whitley’s lifelong passion for flowers has recently been enriched. A single loose bulb for amaryllis has yielded a richness of blossoms, the likes of which she’s never seen before in her many, many years of horticulture.

The bulb she picked up at the local Walmart in mid-November, and weeks later there have been a total of 15 blooms of Red Lion Amaryllis on the three stalks.

There was nothing extraordinary about the bulb that she could tell. The credit goes deeper: “I think it’s the potting soil I used.”

The Hunterdale resident has enjoyed flowers since she was a teenager.

“I like flowers. Period. I’m a flower nut,” she said. “I learned at an early age the difference between a weed versus something to enjoy.”

Her interest has also included many past classes in horticulture, though she’s not belonged to any garden clubs.

After the amaryllis has faded away — as all things beautiful must — she’ll carefully transfer the bulb from the container to her outdoor garden for future blossoms.

“I’ve never seen anything like it,” said Whitley, still marveling at her good fortune. “I have thoroughly enjoyed it.”

The sweet by and by

By Scott Baker About a week ago I received an email from a former parishioner letting me know what was... read more