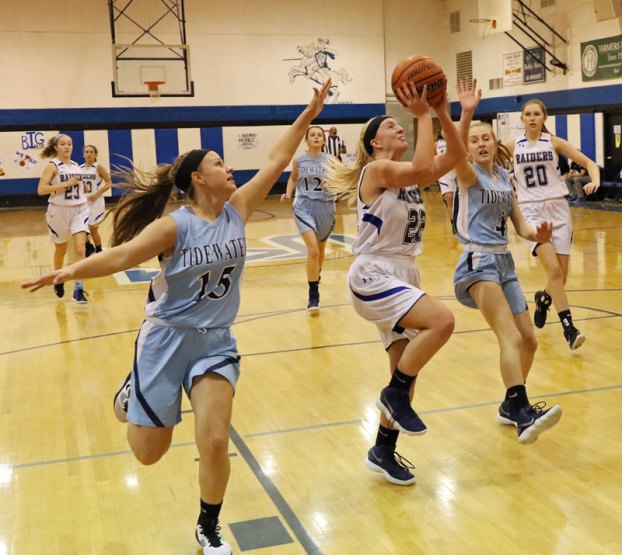 Kailey Hurst lays up a shot on a fast break. -- Frank A. Davis Tidewater News 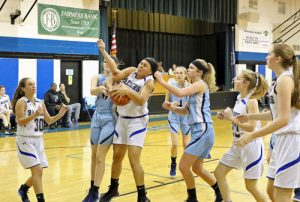 Covonna Bynum fights with defenders for a rebound. — Frank A. Davis Tidewater News

The Lady Raiders, playing great defense, held the Lady Warriors to 2 and 4 points in scoring for the first two quarters of play. Their offensive scored big with 10 and 18 points for the same two quarters to hold a 28-2 lead at the end of the first half.

The Lady Warriors did come back strong after the half and for the third quarter outscored the Lady Raiders 14-4. But that momentum could not endure into the final quarter as the home team prevailed in scoring 13-7 to seal the win. 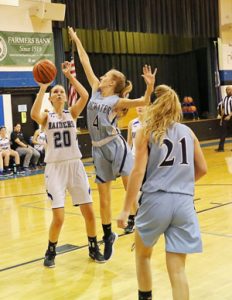 Ashtyn Dunn gets off a shot over a defender. — Frank A. Davis Tidewater News

In scoring for the two Lady Raiders were in double figures. They were Katelyn Holland with 17 points and Kailey Hurst with 13 points.

For the Lady Warriors, Madison Vaughan lead with 12 points.

Southampton Academy Lady Raider head coach Rebecca Fretz said after the game, “I think the game went very well. My point guard, Katelyn Holland, had a great game as she came out firing away and didn’t let up. Our defense did very well with our press. I am just happy the way the girls played and for all of them to get in and do something well.”

Demontre Hamlin goes high to release a shot. — Frank A. Davis Tidewater News WINDSOR It was an off-night in... read more