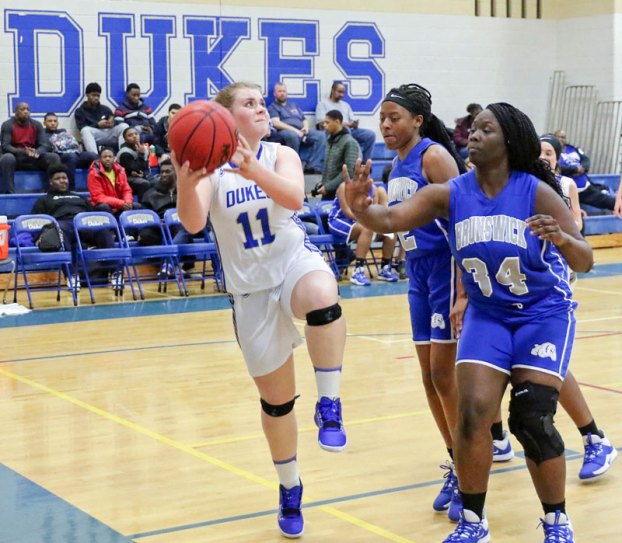 Melissa Carr eyes the basket for a shot. -- Frank A. Davis Tidewater News 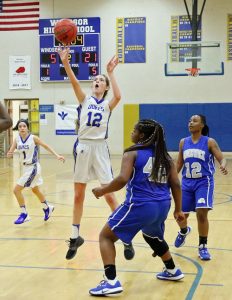 The Windsor High School Lady Dukes basketball team made a fourth quarter run at the visiting Lady Bulldogs of Brunswick High School on Monday, but fell short as they lost 20-29.

Windsor was down 7-21 at the end of the first half of play. They had their best quarter play in the third quarter as they outscored the Lady Bulldogs 9-5 points to end the quarter behind 16-25. Both teams went cold in the fourth quarter with both scoring only 4 points apiece.

Windsor Lady Dukes Head Coach Wilhelm Johns said after the game, “I think we played a pretty good game, but what killed us was the first half. We had 16 turnovers and they capitalized with about 20 points on turnovers. The second half we only had six turnovers and that kept us in the game. We missed a few free throws in the end, but we played better. The first time that we played them the score was 50-9, so we have come a long way.”

Melissa Carr led the Lady Dukes in scoring with 11 points.

The Lady Bulldogs had two players in double figures. They were Aniva Seward with 12 points and Nyiesha Pair with 11 points.

All Elite Wrestling LLC’s Billy Gunn, formerly of the World Wrestling Entertainment Inc., poses for a photo with members of... read more