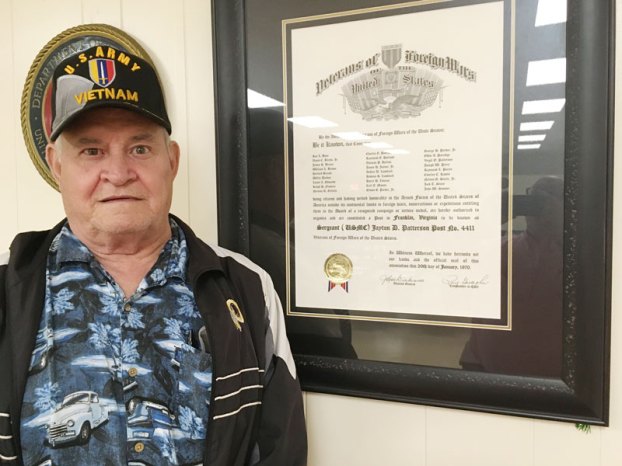 Tommy L. Harmon, a charter member of the Veterans of Foreign Wars Post 4411, which was later named for the late Sgt. (USMC) Jayton D. Patterson. Harmon explained that his name was left off because work prevented him from attending the official ceremony on Jan. 20, 1970. -- Stephen H. Cowles Tidewater News 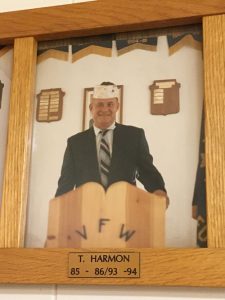 Tommy L. Harmon served as commander of Post 4411 in 1985-1986 and again in 1993-1994. Harmon said that during his leadership he established a building fund that eventually led the post to getting the place they use now. — Stephen H. Cowles Tidewater News

The VFW Post 4411 will celebrate its 50th anniversary this Saturday afternoon, and among the charter members who recalls its founding is also a past commander, Tommy L. Harmon.

Of course, to have even become a member of the Veterans of Foreign Wars organization, he would have had to perform military service.

“I was working at a service station when Uncle Sam called,” he remembered, speaking in the Charles Butler Hall at the Post on Tuesday afternoon.

“I had been to several places in Vietnam, as well as Guam and Cambodia. I was a mechanic working on tanks and jeeps wherever they sent me,” said Harmon. Whenever travel was required to fix vehicles, he was accompanied by somebody who was armed. “I was everywhere. Many times we were fired on, but never got hit. I was lucky.”

Returning to his wife, Diane, whom he had married during leave that first year, Harmon resumed civilian life. His stepfather had gotten him a job with a truck line, Estes, which lasted 40 years, doing “a little of everything.”

Retiring at 62, he enjoyed three months of leisure, and then found new work by driving a school bus on a part-time basis. What he thought might be just a limited time ended up lasting for nine years before finally stopping altogether.

In addition to himself, there were 27 other local veterans who decided to establish a VFW post at the end of the 1960s. The Franklin native and lifelong resident said the original VFW was in the city where the former Sack Nut Peanut Company was located. Later the civil air patrol building was used for a time.

Ultimately, the charter was signed on Jan. 20, 1970. Alas, Harmon’s name was not included because he was not present that day. A work emergency called him away from being present at the signing, and somehow his name was never included. That fact that doesn’t seem to bother him, especially since he can point to his service for the post through the decades.

The initial post didn’t last a year, he said, apparently owing to a lack of interest. The group reformed 13 years later on July 13, 1983.

Harmon is, essentially, the only remaining charter member owing to several members having since died or are simply no long active. He began as quartermaster, and then went on to become a chaplain and twice a commander (1985-1986 and 1993-1994), as well as just about every other position.

It was during Harmon’s time as commander, he said, that a building fund was established to obtain a new meeting place. The long and short of it all is that after earning money through various fundraisers and contributions, the post made two offers to the present site, and the latter was accepted by a bank.

But evidently the place was worth it, for the Sgt. (USMC) Jayton D. Patterson Post No. 4411 remains active today.