Vice Mayor Barry Cheatham announced on Tuesday he would not be seeking another term on Franklin’s City Council this year. 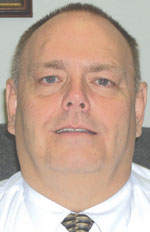 Cheatham, a certified public accountant, was first elected to represent Ward 1 on City Council in 2008, and has served as vice mayor for the past 10 years. Ward 1 includes the area of the city surrounding Franklin High School and extends northwest through part of the Hunterdale area.

“I’m a firm believer in term limits,” Cheatham said as to why he decided to step down. “I think there should be term limits for everybody. There needs to be new eyes, new blood.”

The vice mayor added that while he has enjoyed “every minute” of his 12 years on City Council, “I’ve got to go with what my belief is.”

The vice mayor then offered his assistance to whomever is elected as his successor.

“Twelve years is a good term to have,” Cheatham said. “We’ve kept the budget in line, the real estate taxes down — that isn’t by accident. I can walk away now and be very proud of what has been accomplished, and wish those on the [Council] well,” adding, “I’m here if they need me.”

Mayor Frank Rabil praised the vice mayor for his “business and financial acumen” and for his efforts to make the city more fiscally responsible, thereby minimizing the need for tax increases on residents. Rabil also commended Cheatham for his service as one of the city’s representatives on the Western Tidewater Regional Jail authority and on the Hampton Roads Transportation Planning Organization board.

Councilman Benny Burgess — who, like Cheatham, was first elected in 2008 and is also a CPA — likewise commended Cheatham for his service to the city.

“I’ve enjoyed getting to know Barry over the past 12 years; he’s been a great addition,” Burgess said. “Obviously being a CPA, he knows numbers, but is also very thoughtful, pragmatic, wants to be fair [and] looks at things from all sides.”

Cheatham also at one time served as the city’s representative to the Southeastern Public Service Authority Board, and in fact, took criticism from area residents when he, as a SPSA board member, voted to increase municipal trash rates to $170 per ton, which was, at the time, the highest rate in the country. This, he said, was with the understanding that SPSA was going to sell to a waste-to-energy plant.

“We took heat for it, of course we did, but not everything in life is easy,” Cheatham said. “And we stopped SPSA from living on credit cards.”

The municipal trash rate today, he confirmed, is back down to $57 per ton. The lowering of the rate also owes to Cheatham’s efforts, when he created the Western Tidewater Regional Waste Committee and recruited representatives from Southampton County and Isle of Wight County as charter members. Eventually, this committee gained Chesapeake and Portsmouth as members, as well as other Hampton Roads localities, and was able to renegotiate with SPSA so that Suffolk no longer received free trash collection by virtue of being the locality in which SPSA’s landfill was located.

“When we got that done, we had enough power in our group that we got the use agreements the way they are now, where Suffolk pays what everybody else pays to SPSA,” Cheatham said, adding that that city still receives a portion of what it pays in back due to the presence of the landfill.

“It has a been a pleasure working with Councilman Cheatham over the last year,” City Manager Amanda Jarratt said. “His commitment to the future of the City of Franklin and the Hampton Roads region as a whole is evident by the numerous hours he commits to the various Boards and Commissions that he serves on. I wish him well in his future endeavors.”

Cheatham hopes that his successor, whoever that may be, continues his tradition of speaking to residents and employees at the Village at Woods Edge, which he has done annually since winning his first election, and to other community groups as well.

“I think they need to be there and see the people,” Cheatham said. “I was elected to represent Ward 1, but moreover, I was elected to do what was right for the city as a while, and I’ve tried very hard to keep that in mind and to live up to that.”

City Registrar Jennifer Maynard confirmed that as of Tuesday, no one had filed to appear on the ballot for Ward 1, nor for any of the other City Council seats that will be up for election in June. These include the office of mayor, the Ward 2 seat, which Burgess holds, and the Ward 4 seat, which Councilman Linwood Johnson holds. The deadline to file for any of the open City Council positions, Maynard said, is on Tuesday, March 3, at 7 p.m. The election will be in May, with the current Ward 1, 2 and 4 terms ending June 30.