A Franklin man has been taken in custody in regard to a report of gunfire heard on Saturday. 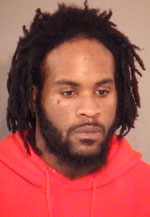 According to Franklin City Police Spokesman Sgt. Scott Halverson, the department’s communications center received a call at 2:28 a.m. about shots fired in the 900 block of Pretlow Street. On arriving, units reportedly heard a shot fired and saw a vehicle leaving the scene at a high rate of speed.

An investigation led to the arrest on Sunday without incident of Duwayne Faulk of Franklin, who was charged with possession of a firearm by convicted felon, fleeing from law enforcement and driving without a license.

Faulk is being held in Western Tidewater Regional Jail without bond.

Halverson stated that the investigation is ongoing.

Anyone who has information about this crime is asked to call Franklin Police at 562-8575 or Franklin Crime Solvers at 562-8599. Information that leads to an arrest can earn the caller a cash reward while remaining anonymous.