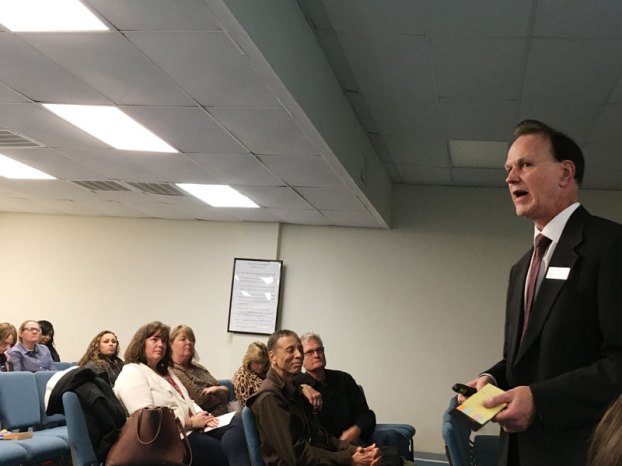 People who attended the Western Tidewater Human Trafficking Symposium on Thursday night were called to take action against a growing criminal practice that principal speaker Patrick J. McKenna equated to slavery. The program was hosted by Tabernacle of Holiness Church on Franklin Street.

McKenna is the director and co-founder of the Virginia Beach Justice Initiative, which he said is a faith-based non-profit organization determined to stop human trafficking in the Greater Hampton Roads region. The group’s name was chosen for name recognition.

Before deciding to battle trafficking, said McKenna, he was a defense attorney for 30 years. In that time, such as working in Petersburg or Virginia Beach, “nine times out of 10 I could not tell that they were victims of human trafficking.”

Trafficking, he explained, is the exploitation of vulnerability, and can be done for purposes of providing forced labor or sexual acts. The victims are not necessarily people under the age of 18.

People who become ensnared are often threatened with serious harm into doing the above acts. Part of what keeps victims in place is what he called a “climate of fear and emotional abuse … creating dependency … total domination and complete objectification.”

Among the myths about trafficking:

• That it involves some form of transfer or transportation

• That victims could just leave when they want

McKenna said, “Nine out of 10 are not doing it [sexual acts, for example] because they want to, even if they say so.”

Victims often won’t testify against their pimps or boyfriends out of fear or even some emotional attachment/loyalty.

“They might not even be aware that what’s being done is a crime,” the director. “It can happen to anyone.”

Places where trafficking can occur are at factory facilities, interstates, military installations, truck stops, college, airports, among transients and the homeless.

A way to identify potential victims is through branding, such as tattoos of crowns or barcode or even in nail designs. These, he said, are “signs of ownership.”

A video presentation titled “Chosen” focused on two females, one who almost became lured into trafficking, and another who did. The former said she realized at one point that someone had been scouting her as a potential sex worker, hence the title. McKenna said afterward that the first woman has since gone on to nursing school. The second is rebuilding her life after being able to escape her predicament.

During an open question time, one resident asked if trafficking is present in Franklin and Western Tidewater. City Police Chief Steve Patterson said that to the best of his knowledge, there were no arrests for prostitution in 2019; Sheriff Josh Wyche confirmed the same for the county. Another panel member noted that in the Western Tidewater Regional Jail, there are/have been victims from this area.

The sheriff urged residents to make law enforcement aware if they see what looks like potentially suspicious behavior similar to what they learned that night.

He added that it’s important for parents and other adult role models to pay attention to their children and teens.
“Young folks are always looking for attention. If you don’t give it, they’ll look elsewhere.”

The director said he’d like to see such awareness/education programs made mandatory in schools. He urged people to speak to their school superintendents about implementing such lessons in curriculum.

“Tell your local schools, ‘We want something to be done.’”

Patterson concluded the symposium by calling on the audience members to feel free to reach out to police or the sheriff’s office. The problem of trafficking is getting bigger.

He said, “We’re committed to not having this happen in our community.”

In addition to 911 for emergencies, other local resources to whom people can contact:

COURTLAND The Virginia Department of Historic Resources this past December added an area in Southampton County known as the Courtland... read more