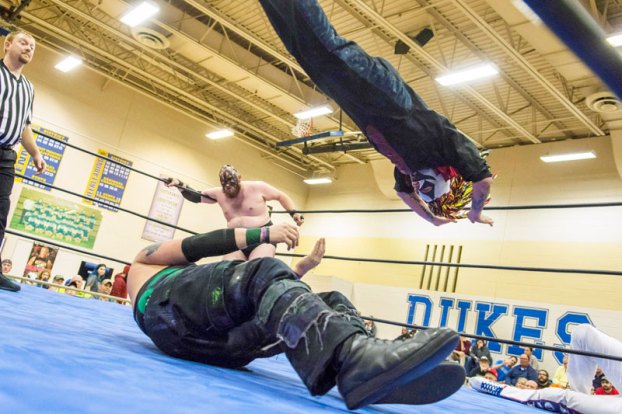 Livid the Clown, above, delivering a splash to Demented Bradley, below, during 2020 Vanguard Championship Wrestling event on Jan. 4 in Windsor High School. -- Jonathan McLarty 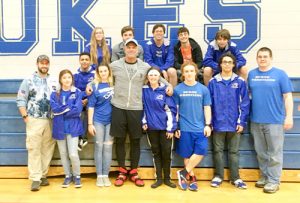 All Elite Wrestling LLC’s Billy Gunn, formerly of the World Wrestling Entertainment Inc., poses for a photo with members of Windsor High School wrestling team. Head coach Sumner Bradshaw is at far right. At far left is Robert Gurin, a parent of one of the young wrestlers, who regularly helps the team. — Submitted Sumner Bradshaw

The Windsor High School gymnasium on Jan. 4 was again the setting for the return of the VCW Pro Wrestling event. Sumner Bradshaw, who coaches the school’s wrestling team, reported that a very good crowd attended that night.

was declared a no-contest, but the match that was restarted by Senior Official Ron Mils

“This was once again a successful fundraiser for our wrestling team,” said Bradshaw. “We raised about $3,400 that night from ticket sales, concessions and a 50/50 raffle. This money will be used to purchase replacements for some uniforms, new headgear, new shorts and T-shirts as well as other items as needed.

“We are very grateful for a very supportive community that helps us put on this wonderful event each year. Once again, the total cost of this event was funded through generous donations of community sponsors. To them we say a huge thank you! Our main attraction this year was former WWE and current AEW Superstar Billy Gunn. Wrestling fans would know him most popularly as part of the faction D-Generation X.”

Dukes will be ready for new games

WINDSOR  Frank A. Davis | The Tidewater News The Dukes’ Will Brown passes the ball during a game against the... read more