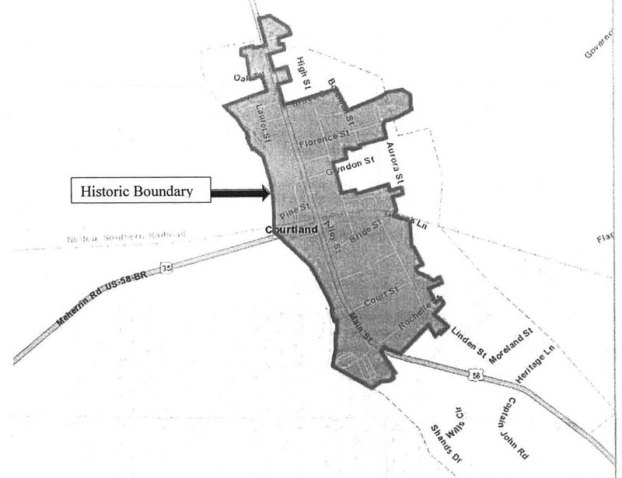 This map shows the boundary for the Courtland District, which is now on the Virginia Landmarks Register. -- Courtesy Department of Historic Resources

The Virginia Department of Historic Resources this past December added an area in Southampton County known as the Courtland Historic District to the state’s Landmarks register.

In the nomination form, the area’s richness both history and architecture are detailed.

For example, in the department’s announcement, the agency noted “The General Assembly established the town in 1791 and Jerusalem grew slowly as a minor market center, bypassed by important transportation corridors arising during the early 1800s.”

The Nat Turner rebellion of August 1831, “a signal event leading up to the Civil War, is indelibly associated with the village of Jerusalem, now Courtland, and Southampton County … Turner’s rebellion catalyzed Virginia and other Southern states to enact laws to prevent similar revolts by restricting the movement and education of blacks across the South, and by closely monitoring African-American religious congregations, among other repercussions.”

In the last 1880s, a railroad was established in what was then known as Jerusalem, but later changed to the present day name. This mode of transportation nurtured business activity related to the cultivation, storage and sale of peanuts.