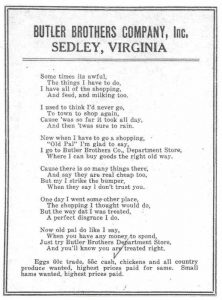 Sedley, one of the most thriving little towns in Southampton County, has just closed an unusual year — the year 1919. And, the year 1920 opens with a bright and prosperous future. Though only a few years old, Sedley is growing into a modern town. Where it aims it hits. Sedley’s location is practically at the center to all points in the county. By way of the Virginian Railway, it is only a short trip to larger cities; and, it is hoped the future will soon find passenger service over the Surry, Sussex and Southampton Railway, giving travelers connection with the Norfolk and Western Railway at Wakefield. From there, one could travel to many important destinations to the east and to the west such as the big cities of Suffolk and Petersburg.

The Sedley School and the churches, of various denominations, are wide awake in educational and religious interests and are meeting the demands of this progressive day.

No less mention should be made of the health record of the year, there being only a few ill patients and only one death, that of an infant, in about three years. It goes without saying that the presence of Dr. R.L. Raiford’s Clinic contributes greatly to the health and well-being of Sedley’s citizens.

R.L. Johnson’s drug store, the U.S. Post Office, J.M. Johnson’s Garage, Wills Grocery Co. and R.C. Bulls Blacksmith Shop all have had most profitable years with splendid increases in their businesses; as well, several other business institutions have made decided improvements. At present, there are many grand and substantial residences up and down Sedley’s avenues. Now, plans are being drawn for several large dwellings to be erected by early spring. A large garage is to be built by Wills & Co. on Main Street.

Among the most progressive business concerns in all of Southampton County, Virginia, we find Butler Brothers Company, Inc. of Sedley. They were organized under the laws of Virginia, the charter being secured by Charles W. Davis on Sept. 30, 1913, with a minimum capital of $2,000 and its maximum $15,000. Its organizers, J.T. Butler, J. Butler, J.E. Butler and J.D. Davis, absorbed the minimum capital, and began to operate a general mercantile business on the corner of First Street east of the Virginian Railway in a small store building rented from J.E. Butler.

Also, at that time, the Sedley Milling Co. was operating a cotton gin and a sawmill. Seeing the future business that should come to Sedley, the Butler Brothers Company purchased the entire holdings of the Sedley Milling Co. and began to operate the latter’s business on a larger scale. They also purchased the main store building and lot, which they occupied, and a warehouse and lot on the east side of First Street and Virginian Railway. They continued their business successfully until the summer of 1916 at which time they made application to the Virginian Railway for lease of land on which to build a warehouse. Being successful with the lease, they erected a modern warehouse — 32×62 feet — with an upstairs display and storage space.

The fall of 1917 found the Butlers erecting a smokehouse to accommodate their expansion to include the meat packing industry. They have continued their business successfully into the year 1920 — adding a department store with a floor space of 5500 feet equipped with an up to date Delco lighting system. The manager of this concern, now, has a plan on foot to extend to a portion of the village’s citizens electric current in order that they may have the benefit of electric lights in their homes and stores.

Now, the Butlers are thinking about leasing additional land from the Virginian Railway to erect on its siding a warehouse — 32×85 feet — giving them enough warehouse room to handle hay, oats, corn, guano, and all kinds of farming products in carload lots. Lumber products will be added, such as flooring, moulding and weather boarding. By June, they hope to have their own saw mill, lathe and planer mill in operation.

The Bank of Sedley, another prosperous concern of this flourishing little town, shows 1919 as its record year since its organization. Their annual reports show that deposits have increased more than 100 per cent and that profits for the year were 20 percent on the capital stock.

Among the other activities worthy of notice during the past year are the extensive improvements by the Surry Lumber Co. to their offices in Sedley which, with its heating and lighting plants and other conveniences, would do credit to a town of much larger size.

The Surry, Sussex and Southampton Railway has made marked improvements in their operations in Sedley, having built a transfer track connecting with the Virginian Railway. Already, several cars of lumber shipped over the Surry, Sussex and Southampton Railway by the Surry Lumber Co. from their mills at Dendron have been transferred to the Virginian Railroad at Sedley.

The Surry, Sussex and Southampton has also received several cars of coal over the Virginian at Sedley. Although the Surry, Sussex and Southampton Railway’s freight and passenger service only extends from Scotland, on the James River, to Dory, just 8 miles north of Sedley, community people have been looking forward with much interest to the time when this service would be extended to Sedley. Recent operations of this railroad have caused the people to have renewed hopes that their dreams would be realized in the not far distant future.

The Surry Lumber Co. has been very generous in making improvements in the homes of its employees and will build shortly a number of additional homes for other families who will soon move to Sedley.

By Scott Baker Every year, the Sunday following the Epiphany (Jan. 6), the church observes the feast of the baptism... read more