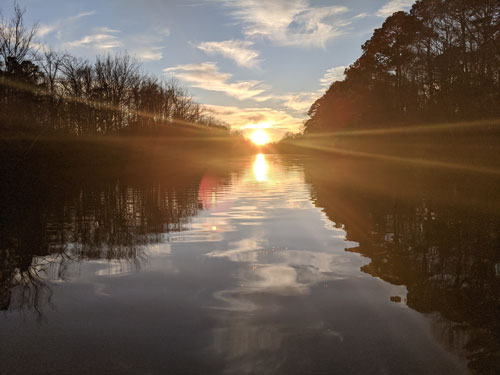 The RiverGuard photographed this sunset from the Blackwater River at Old South Quay. -- Submitted Jeff Turner 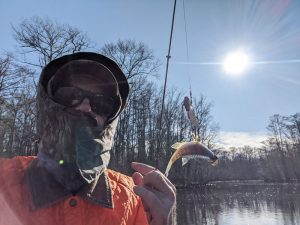 A very cold RiverGuard with a tiny bream he recently caught on the Blackwater River. — Submitted Jeff Turner

Spirit of Moonpie and I spent the 31st through the 2nd on the Blackwater below Franklin. The river was clear and 46 degrees. Air temps ranged from 31 to 60 degrees. I saw no water quality issues and only picked up about a half a bag of trash.

The fishing on this trip was challenging. The first day I stayed down river because the wind was so bad that the river had white caps on it in some places. I caught a speckle … all day long. That kept me from being skunked but not by much. The second day I went all the way back upriver from Franklin and the fishing was much better. I caught speckle, bass, bream, chain pickerel and fliers. All were caught on a quarter-ounce blade bait jigged vertically.

More sad eagle news. I have mentioned before of the loss of the eagle nest at Cherry Grove. Now, sadly, the Butler Farm nest has also fallen out of its tree. I was pretty sure last year that nest was unoccupied for some reason. It’s hard for me to imagine both birds of that pair dying and I would have thought even if one was still alive it would hook up with another mate and they would continue to use that nest. So now I’m sad that I can’t watch the baby eagles anymore. Hopefully, another pair will build along the river before too long.

Well, another year is under my belt. My 2020 river vision is that I hope to see: Less trash on the rivers; more fish; less alligator weed; less dangerous boating practices; more wildlife; and more me on the rivers.

To contact Jeff about river issues, email him at blknotkpr@earthlink.net

By Jeff Turner Spirit of Moonpie and I spent the 26th through the 28th on the Blackwater above Burdette. The... read more