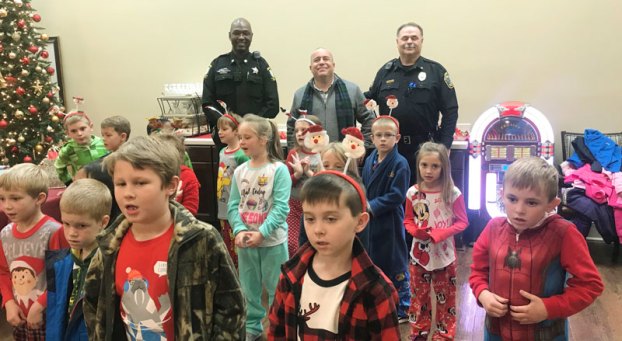 In back are Josh Wyche of the Southampton County Sheriff's Office, Southampton Academy Headmaster Scott Wasdin and an unidentified officer with the department. In front are SA first graders as they sing to residents at Courtland Health Care.

SA first graders give back to other people at Christmastime

Of all the months of the year I believe December is the most special. As an adult, there are many reasons, including the celebration of holy days, for different religions and the end/beginning to a new year and the hope that brings.

For first graders at Southampton Academy, it is a time of anticipation and excitement. This is the age when they “get it.” Although most realize what the holiday season means in terms of their families’ religion, they are still at the magical age where they know this is the time they can actually make and re-make (many times over) their list to Santa!

Six- and 7-year old children are very aware of the extremely popular “elf” that is watching them in their home and classroom. Those elves are very sneaky and impish. They keep watch over each child, and the elves are clever in changing their location each day both at home and school. The children absolutely do not want a report of being “naughty” reported to Santa. It is well known by first graders that the elves fly to the North Pole each night to see Santa and give their report on each boy and girl.

Ann Marie Vinson and Lisa Skeeters are the two first grade teachers at Southampton Academy in Courtland. Vinson and Skeeters work diligently to teach their students in the most interesting ways I have ever seen.

I am in awe of the creative and exceptional ways they work with their students in seeing how they make it truly fun to learn for their students.

I have been on three field trips this year with the first-grade classes. Each was exciting, and the children learned so much while having a great time.

In October we had the such an exciting day at Turtle Creek Farm. Between hayrides, pumpkin picking and decorating the pumpkins, farm owners Blair and Jenny Bunn introduced the children to so many kinds of animals. The children learned without really knowing they were learning. I even learned how to milk a cow.

During our trip in early December to the Southampton Heritage Village Agriculture & Forestry Museum, we saw many trains inside the main building. There were trains even running overhead and, if we all looked carefully, we could see it snow inside. It was enchanting for all. We went outside and saw antique farm equipment, hand tools and rural wares used “way back when.” The children also saw a one-room schoolhouse.

The last field trip was different. The first graders went to Courtland Health Care the day before Christmas break. This field trip was as exiting to the children as the first two. There were no animals or trains or pumpkins, only the children. 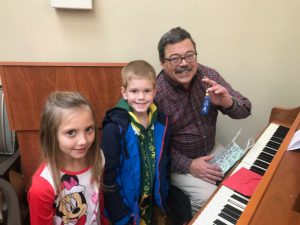 The children sang carols and performed original songs for the residents of Courtland Health Care.

Skeeters said, “This is my 27th year of caroling at Courtland Health Care. It is always such a delight to witness the joy the children bring to the residents.”

Vinson summed it up when she said, “Christmas is a magical time of year, especially for first graders. We like to teach the children that you can bring happiness and joy to people and singing Christmas carols is a good way to do that. The children could see the joy on the residents’ faces. Several said it made them feel good and giving joy is what Christmas is all about.”

Vinson, Skeeters and instructional assistant Paulette Fekete explained to the children that they were giving back to others and exactly what that meant.

I saw the children light up with that joy that comes from giving back and I do not believe one of those first graders was thinking about the elf’s report!

Scott Claud, an alumnus of SA, who had practiced with the children at school, accompanied them on several songs at the piano.

“I am always happy to be a part of Christmas’ celebrations especially when they benefit the old and the young,” said Claud. “Working with the children made my Christmas!”

The children were delighted to see their headmaster, Scott Wasdin, attend and excited to meet Southampton’s future sheriff, Josh Wyche, who said, “It was wonderful to be invited to see the children of Southampton Academy spread the joy of Christmas to the residents of Courtland Health Care.”

Teaching children to get in the habit of doing kind things and paying it forward helps build a better future and can change our world.

As the new year begins, we should all remember what the gift the first graders of Southampton County gave and received that day at Courtland Health Care: The smallest thing can make the biggest impact.

“Together we can change the world, one good deed at a time.”

Let us all take to heart this quote: “You may be only one person in this world, but to one person at one time, you are the world.”

DIANNE DAWSON GARRETT is an assistant teacher to Ann Marie Vinson at Southampton Academy. Contact her at 653-2512.