Isle of Wight clerk to retire

Sharon Jones has worked in the Isle of Wight County Circuit Court Clerk’s Office for more than 40 years, starting as a deputy clerk in 1976 and rising to Clerk after being elected to the office in 2007. 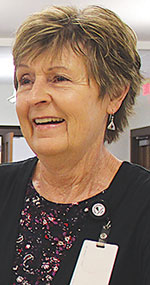 Jones recently turned 65, and is mid-way through an eight-year term. Jones said she didn’t want to wait out another four years.

Jones worked for many years with former Circuit Court Clerk William Laine, who retired in 2007.

“Sharon has done an outstanding job for a long, long time. She just took over seamlessly once I retired. She’s very good with people and has represented Isle of Wight very well,” said Laine, who served as clerk for 34 years.

Jones’ Chief Deputy Clerk, Kathleen Torrence, will be sworn in Jan. 31 as interim Circuit Court Clerk and plans to run for the position in the next election, said Jones.

“Kathy has been groomed as successor for a long time. She has done an outstanding job also,” said Laine.

As Jones is mid-way through her second term, the position will require a special election.

Jones plans to ask the Isle of Wight Board of Supervisors to schedule it during the 2020 General Election, so as to save the county money.

“It will be a big year anyway, with a presidential election. People will come out and vote,” said Jones.

The Circuit Court Clerk oversees all documents and proceedings related to wills, land deeds, civil and criminal cases, marriage licenses and passports, as well as preserving and digitizing historic documents dating back to the 17th century.

The biggest change Jones has experienced in her 43 years has been with technology.

Jones came to work in the office when it still used manual typewriters.

The younger clerks today laugh and ask, ‘What is a manual typewriter,’” said Jones.

The office gradually added electric typewriters and then its first word processor.

In 1987, the office went on the Virginia Supreme Court’s computer system, and that has expanded and been updated over the years.

After Jones was elected Clerk in 2007, the office added the ability to record land deeds electronically through Logan Systems Inc. Title searches can also be done remotely.

“We never touch the paper,” she said.

Most of the work the clerks do today can be done electronically, and the office allows attorneys to file civil cases online, said Jones.

Jones notes that most local attorneys still prefer to come to the office. For attorneys who need it, the Clerk’s Office provides a system for secure and remote access of ongoing court documents.

“We work hard at making it easy for the other side,” said Jones.

Jones also remembers when Laine had to take notes during court. He would bring those notes back to Jones, who typed them up for the judge. It could take up to two days to type up the court orders and send them off, said Jones. Today, cases are updated in real time, she said.

One of Jones’ most ambitious projects has been the digitizing of records — some dating back to the 1600s — as well as having court documents, such as deed and order books and marriage registries, preserved through grants from the Library of Virginia.

The records were indexed and digitized in 2012 by FamilySearch of the Church of Jesus Christ of Latter-day Saints. More recently, Jones has been fortunate to have a volunteer, Valerie Schmidt-Wilson, take on the job of digitizing and indexing thousands of pages of loose papers that were once stashed in boxes or in the Library of Virginia’s warehouse. Loose papers, meaning they were never officially recorded, are now being correlated with their digitized versions to make them more accessible to the public.

After she retires, Jones plans to travel with her sisters and cousin, read, run and ride her bicycle, go to the YMCA and have time to do more yard work than she ever has before.

Over the years, her sisters and cousin have had to work around her schedule, said Jones.

“Judges call me a working clerk, and that probably comes from working my way up the ranks,” she said.

Jones will miss her staff and those who come in the office, as she particularly likes helping people going through probate.

The office has received many compliments on how well it is run and Jones is sure that will continue.

Meanwhile, “I’ve never been told by someone that they’re sorry they retired,” said Jones.

DIANA MCFARLAND is editor of The Smithfield Times. Contact her at news@smithfieldtimes.com.

FRANKLIN A Franklin woman has been apprehended on a charge of robbery and assault on New Year’s Day, according to... read more