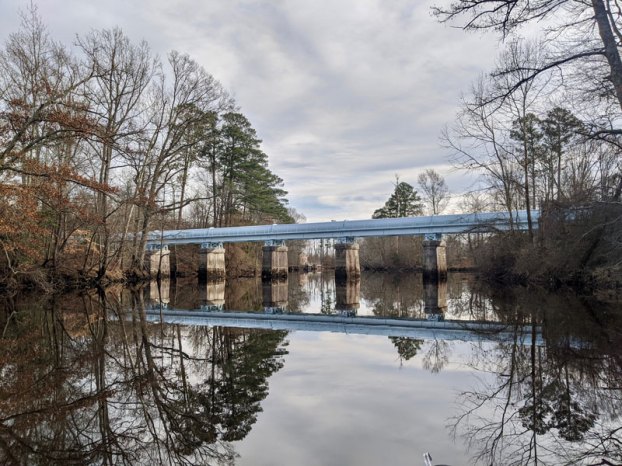 The Lake Gaston pipeline that crosses the Blackwater at Burdette across the old Virginian RR bridge. Submitted | Jeff Turner

Spirit of Moonpie and I spent the 26th through the 28th on the Blackwater above Burdette. The water was perfect level at 6.6 feet on the USGS gauge at Burdette and 41 degrees. Air temps ranged from 36 to 65 degrees. It was perfect beautiful weather.

Trash was about normal for that part of the river. I picked up about a bagful. I did not go downriver where the huge trash piles are as I am still getting my faith in the outboard back up to par.

It was pretty busy out there this trip as far as the hunting. Deer hounds were everywhere, which is always enjoyable watching them. It’s always funny to me to see the deer swim the river and when the dogs get there how they decide who is going in the water after the deer. There always seems to be that one dog that takes charge and goes first, then one by one most of the others will follow. And then there is always that one dog that just says NO, and ends up running along the now opposite shore trying to stay in earshot of the others. I did see some NICE deer cross; couldn’t get any pictures, sadly though, because I was too far away.

The fishing on this trip was fantastic, amazing, stupendous, yeah, all that. This is the time of year I fun fish for bowfin, blackfish as we call them. They ain’t good to eat but they sure are fun to catch. I caught four citations on this trip, which is crazy. Blackfish must be 30 inches or 10 pounds to qualify. I caught a 9.13, 10.2, 10.4 and a 10.12. I caught probably 25 in all. I lost one that was so big I never turned it. It took off stripping drag and ran 50 feet right to a tree top. That sucked. I would have at least liked to have seen it. I also caught 20 catfish jigging the blade bait also. They were stacked up so thick at the Stringwood curve that the depth finder was showing 15 feet when it was really 22 feet deep. There were hundreds of channel and white catfish there for some reason, maybe thousands. I was catching them in the mouth, tail, fin, it didn’t matter. There were so many I could just lower the lure and feel the half-ounce blade bait hitting them as it went through the 15-foot-thick column of fish. It was wild and fun beyond belief.

Well, it sure was nice being back on the river after my month-long hiatus due to truck problems and self-inflicted outboard motor problems. In actuality it was really only two weeks due to those problems as I was in The Tidewater News for two weeks. Regardless, I pray it’s a long time before I go that long without being on the two rivers we call the Blackwater and Nottoway.