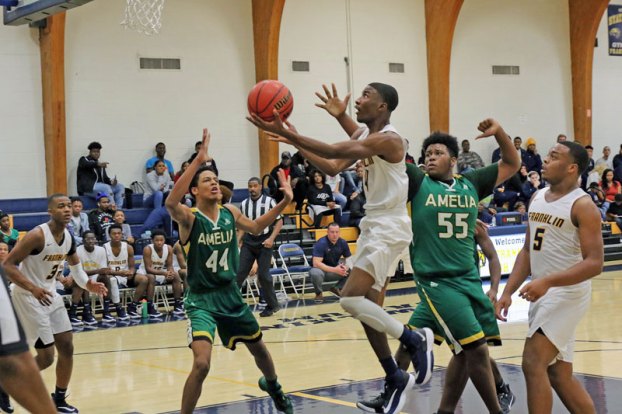 Myroen Barret driving with some pressure around him. Frank A. Davis | The Tidewater News 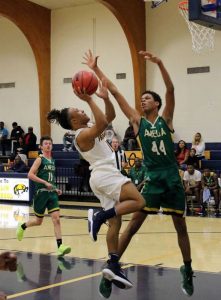 LaSean Nichols Porter gets one off over a defensive player from Amelia. Frank A. Davis | The Tidewater News

Playing in the consolation game of the sixth annual NAPA Auto Parts/Bluewater Rentals Holliday Classic at the Peggy Wilkens Gym in Franklin High School on Saturday, the home team Broncos were successful as they defeated the Amelia County High School Raiders, 62-51.

The Broncos jumped out in front from the tip-off and never fell behind during the game. Offensively, they outscored the Raiders in every quarter of the game.

Franklin High School head coach Robbie Cutchins said after the game, “What a phenomenal effort by these kids. Playing Amelia a 2A school that is in a different division than us, a bigger division if you will. We got out defensively, we knocked down some shots and created some turnovers and scored in transition. I am just so proud of these kids, the way they fought, the way they practiced over the holidays to be able to capitalize with this W. I also want to thank my sponsors NAPA Auto Parts/ Bluewater Rentals for sponsoring the tournament as it is a great event.

In scoring the Broncos had four players in double figures. They were led by Bryan Powell with 16 points, Daemari Holden with 15 points and Derrick Perry and Myroen Barrett both scoring 10 points apiece.

For the Raiders, Stacy Byrd scored 20 points followed by NaShawn Greene with 15 points.

For the championship game it was played by Atlantic Shores Seahawks versus the Ocean Lakes Dolphins. The Dolphins fought back in the final minutes of the game to tie the score at 65 all to send the game into overtime. But in overtime, the Seahawks prevailed to win the game 80-72.

Mike Brown of the Seahawks was named the MVP of the tournament. In the final game he scored 25 points. Jontae Allen of the Dolphins led in scoring for them with 34 points.

Broncos lose to Seahawks in opening round of Holiday Classic