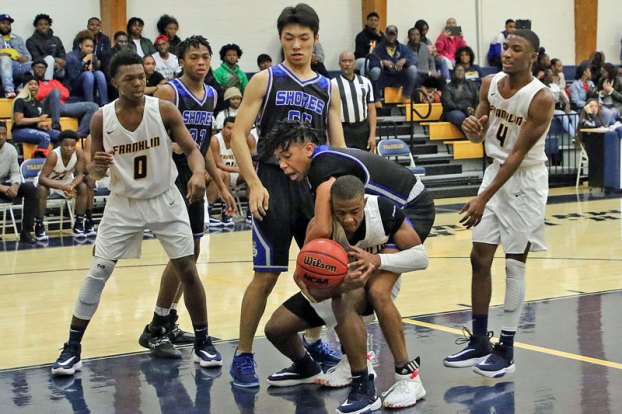 A fight for the ball between Franklin and Atlantic Shores. Frank A. Davis | The Tidewater News

Broncos lose to Seahawks in opening round of Holiday Classic 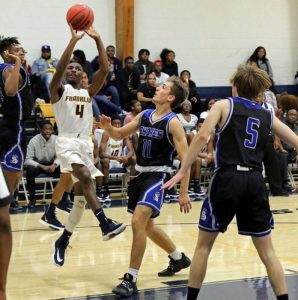 Unchecked on a jump shot is Myroen Barrett. Frank A. Davis | The Tidewater News

In the Bronco versus Seahawks game after an 8-all tie in the early minutes of the first quarter, the Seahawks took total control of the game and very easily advanced the championship game with an 84-55 win over the Broncos.

Franklin High School head coach Robbie Cutchins said after the game, “It was a heck of a battle against a really good basketball team. At the end of the day I knew what we were up against coming in. We fell asleep a little bit in the second quarter, but we battled back well and won the third quarter … obviously there was a big deficit and they hit some big shots to open up the lead in the fourth quarter. … I was proud of the way that the kids battled. … there is no quit in this team, there is a lot of fight and it’s not pretty, but I am so proud of them.”

In scoring, the Broncos had one player in double figures and that was Daemari Holden with 10 points.

The Seahawks had three players in double figures. They were Eric Henderson with 23 points and Mike Brown and Tiger Tan, with 10 points apiece.